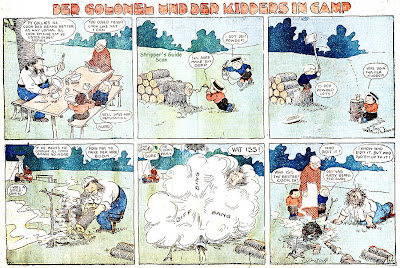 How many Katzies rip-offs were there? Seemingly an inexhaustible supply, and here's yet another.

DeVoss Driscoll produced the St. Louis Globe-Democrat's homegrown Sunday section practically singlehanded from late 1903 until the middle of 1905, when the paper waved the white flag and switched to a syndicated comic section. This strip wasn't one of the high points on Driscoll's tenure, but was to be expected. Pretty much every homegrown comic section featured a Katzies clone. Don't blame the cartoonists for having no imagination, though. It was undoubtedly the editors that commanded these rip-off to be included. Der Colonel under der Kidders ran from June 12 1904 until the end of the homegrown section on July 30 1905.

Driscoll never produced any other comic strips that I know of except for his run at the Globe-Democrat. Here's a link to more about Driscoll.