Obscurity of the Day: It's Only Ethelinda 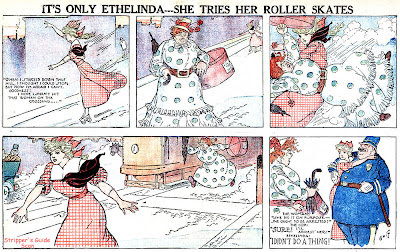 The pretty girl comic strip genre didn't really take off until the 1920s. Before then some cartoonists, George McManus for instance, were noted for their lovely damsels, but very few strips made them the main characters. It's Only Ethelinda was one of the few strips of the oughts that focused on a curvaceous beaty. Not that Ethelinda paraded around in deshabille like the flapper girls of later strips, of course -- the 1900s was not a decade that countenanced that sort of wanton sexuality. Back then a short-sleeved frock and a glimpse of ankle was about as close to promiscuity as could be dared.

It's Only Ethelinda ran 8/23/1908 to 7/17/1910 in the Philadelphia North American. The strip, on the rare occasions when it was signed, gave credit to 'Grif'. Some have conjectured that this is Syd B. Griffin, but I'm not convinced since the style doesn't look right and this strip dates a full five years after his other known newspaper strips, all of which were done for New York City syndicates.

Comments:
What a delightful strip -- and considering how rough some strips of the era looked, all the more a wonder!