Obscurity of the Day: Meddlesome Millie 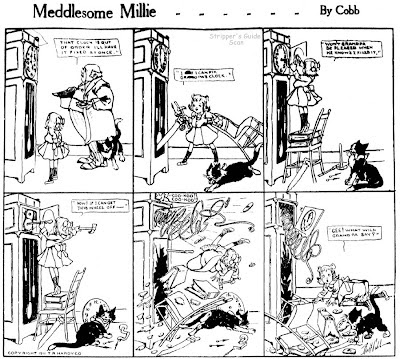 Yet another entry in the naughty kid genre, Bert Cobb's Meddlesome Millie ran in the Boston Post two to three times per week from February 3 to May 3 1911. The copyrights are to the T.R. Hardy Company. I don't know what that is, but presume that Hardy was an owner or executive of the Post.

The strip isn't memorable except for Bert Cobb's excellent cartooning. Cobb was active in newspaper cartooning in Philadelphia at the turn of the century, did a little work for McClure's new Sunday section in 1901, then pops up in Boston later in the decade, doing a few strips for the Herald and the Post.

I hear that Bert Cobb later made a name for himself drawing show dogs, and there are several books from the thirties of that nature, but I don't know if it's the same guy.

I do have a question. E-bay seller H. Lowery (of the Lowery Galary) regularly sells originals from a company called Sponsored Comics. He got a huge lot of them many years ago and sells them one a month or so. But I know none of the titles, even though some of the artists are well known. Titles such as the funny lion Moxey by Gantz, serious crime solver Hub Cabs by Jay Howard (which seems to be a pseudonym of Norman Maurer and someone like Overgard), Happy Days by Norman Maurer and another (later) one by Gantz about three girls called something like We 3. All are in the three tier sunday format and from the late fifties onwards.

At first I thought they may be try-out strips that were never published. But there seemed to be quite a few of them and some of them were accompanied by color overlays. This week a new one (for me) from Boltinoff turns up; a daily one tier called Woody Forrest. This has a publication date on it: une 29 to July 5, 1959. This suggests that it may have been a strip done for weekly papers. That would explain a lot... except maybe the color overlays.

Anything you can ad?

Hi Ger -
I've tried to find out more about Sponsored Comics in the past, didn't really get anywhere. Lowery gave a vague explanation saying nothing, and I checked with the CSC folks who didn't have any ideas.

My guess is that these were marketed as part of a shopper section, something that stores would give away.

I just did actually get a new lead on these a short while ago, should know more soon if my guess pans out. I'll post on the blog about it if my hunch turns out to be a good one.