Obscurities of the Day: Williams at the Boston Post 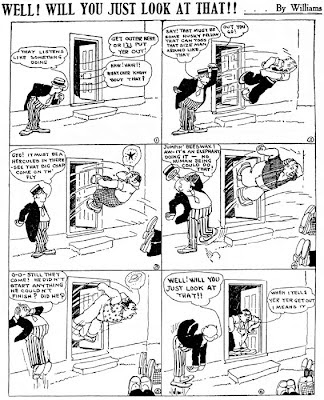 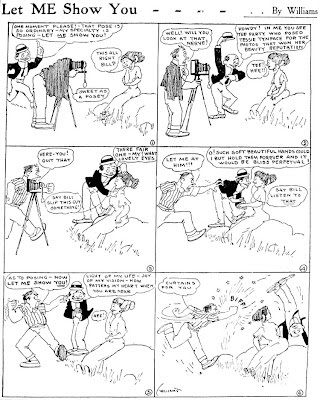 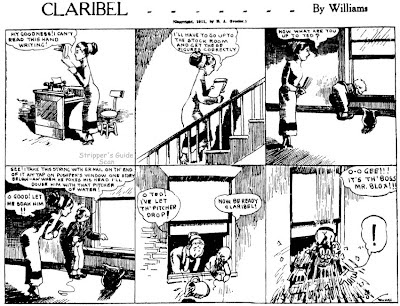 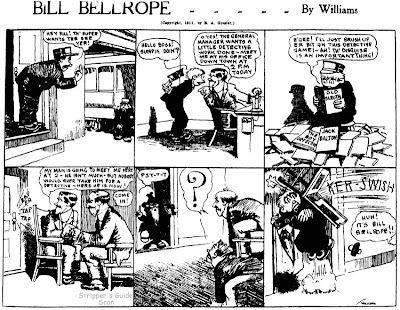 Four obscurities for the price of one today as we take a look at the work of Orville P. Williams at the Boston Post.

I really like Williams' art, so I've always been a bit leery of crediting the 'Post Williams' as Orville. His artwork, which had a wonderful panache to it everywhere else he worked was never up to the same quality at the Post. Yet it almost has to be him because the signatures are in his style. My best guess is that the Post worked Williams too hard and he sacrificed style for volume.

And the Post did keep him jumping. In 1910 when Williams got there it was very unusual for a newspaper cartoonist (other than editorial and sports guys) to be expected to crank out a strip every day, but that's exactly what Williams did for most of his tenure there. And whereas sports and editorial cartoons are normally a single panel, the daily cartoons that Williams produced were six or more panels, as can be seen above. For Williams, a guy used to doing one Sunday strip per week, this must have been a huge effort.

When Williams started at the Post his first continuing feature was Let Me Show You, which ran for a handful of episodes from July 28 through August 6. On August 3rd and 5th he did a pair of episodes off Well! Will You Just Look At That! A week of inactivity then passed, and then Claribel started on August 18, running every second day, then on September 6 Bill Bellrope was added, and these two features ran on alternating days into 1912. On June 8 1912 Bill Bellrope was dropped and Williams cut back to producing just Claribel on alternate days.

I don't yet have an ending for the Williams story at the Post since I am awaiting further microfilm, but he was definitely soon to leave in mid-1912, as later that year he did a short-lived feature for NEA, then did another feature for the Philadelphia North American in 1913.