Obscurity of the Day: Br'er Rabbit 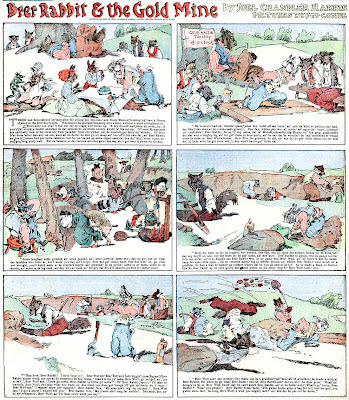 The original Br'er Rabbit comic strip, which featured the characters from Joel Chandler Harris' Uncle Remus tales, came along near the end of Harris's life. He died in 1908, and the strip first appeared in newspapers on June 24, 1906. Though we can usually be safe in assuming that famous authors don't actually write their own strip adaptations, Harris, being a veteran newspaperman, might well have had a direct hand in choosing these particular tales from his existing works, or perhaps even penning new tales for the series. Not being an Uncle Remus fan, I'm in no position to make any pronouncements on the subject.

The strip was distributed by the McClure Syndicate, but it often appeared outside their own preprinted comic sections, meaning it was sold as a standalone feature. Some papers replaced an existing strip from their regular syndicate to fit it into the comics section, others put the feature on the back cover of their Sunday magazine section.

The artwork on the strip was by J.M. Conde, who was already well-known for his delightful illustrations in the original Uncle Remus books. His work on this series was expressive and evocative of the spirit of the tales -- obviously he didn't consider the Sunday comics version of the Uncle Remus tales to be beneath him, as he gave it all he had.

The series ran until October 7, a total of 16 episodes. Each episode had a separate title, but usually Br'er Rabbit, Harris' most famous character, was highlighted. Some comic strip historians prefer to call the strip Uncle Remus Stories, but I've not seen samples where that was used as a running title.

Apparently the strip was well-received because I have found it being reprinted in 1910 and again in 1913. I should say that I'm reasonably certain they're reprints -- I haven't actually compared the various runs side by side.