Obscurity of the Day: Cinderella Peggy 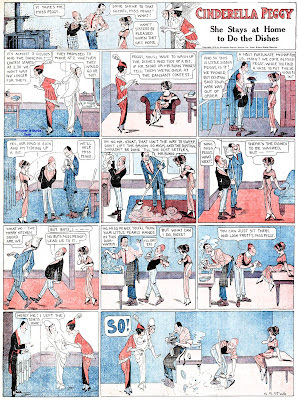 Harold MacGill offered Cinderella Peggy through the then new Newspaper Feature Service, which was yet another of the Hearst syndicates. It ran May 24 to November 29 1914.

At this time the NFS Sunday section had a so-so line-up, with That Son-In-Law of Pa's and Dimples usually getting the covers of the section, with occasional appearances by Louis Wain's beautifully drawn cat pages, plus obscurities like Cinderella Peggy on the insides.

Cinderella Peggy really wasn't a bad strip, but MacGill was just using the title as a disguise to once again recycle his Percy and Ferdie characters. As usual, MacGill's weakness for overlong dialogue was the strip's problem. The sample strip above, believe it or not, is one where he showed unusual restraint in that department. Perhaps in 1914 the newspaper reading public was more accepting of strips heavy with overstuffed word balloons, but to this reader's eye it seems like I'm making a long-term commitment when I dive into one of these strips.