Obscurity of the Day: Pauline, Percy and Little Priscilla 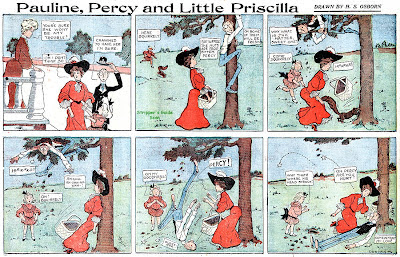 Not much to recommend this strip by H.S. Osborn, but it is part of a minor mystery. The strip ran in the Philadelphia Press Sunday section from October 15 1905 to March 4 1906. However, the strip also ran in one of the various versions of the McClure Syndicate Sunday section, as did a number of other Philadelphia Press based strips, indicating that this newspaper seemed to have some sort of agreement with McClure. Or it could be the other way around. Or none of the above.

Weird thing about Pauline, Percy and Little Priscilla is that after it ended in the Press' Sunday section, it got demoted to running in black and white in occasional weekday editions of the Press. These were formatted in Sunday style but much reduced in size. It was these black and white strips that ran (in color and large size) in the McClure section. This continuation of the strip ended on 9/3/06 or later in the Press, and 8/19/06 in the McClure section.

Okay, we're not talking Al Capone's vault here, but it's the sort of crazy little anomaly that really eats at me because I can't imagine how I would ever solve the puzzle of what exactly was going on. In the words of a certain spinach-loving sailor, it's disgustipatin'.