Obscurity of the Day: Today's Hook-Up 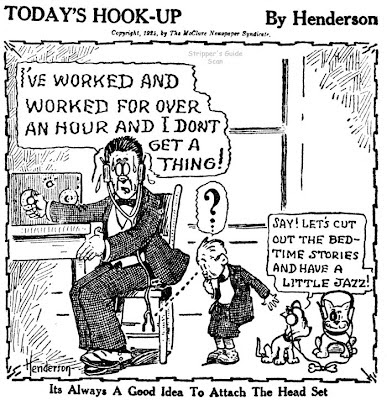 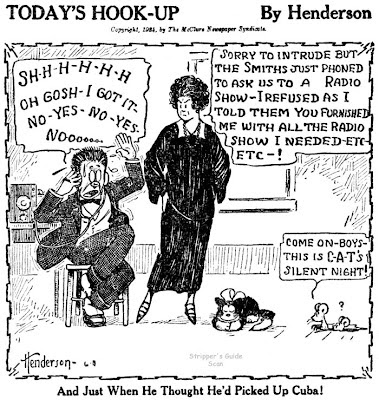 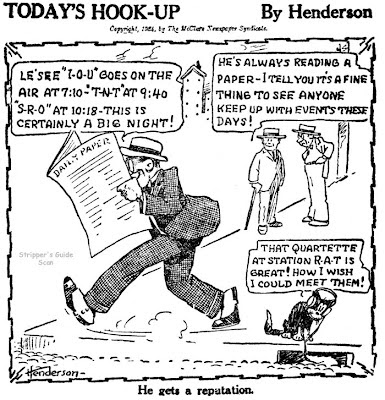 With the advent of wide-scale radio broadcasting in the 1920s and the popularity of building home receivers, newspapers began to cover radio topics with the same fervor that was once reserved for automobiles. Most major papers inaugurated weekly radio pages with all the latest dope on the subject. And of course, where there's newspaper interest in a topic, comics are soon to follow.

Today's Hook-Up by J.C. Henderson (who usually signed himself 'Hen' but not on this feature) was an early entrant, starting on May 19 1924. It was an excellent feature with good art, and gags that showed Henderson to be a knowledgeable radio enthusiast. The McClure Syndicate's only mistake was in marketing the panel as a daily, whereas most newspapers at the time were running weekly radio pages. Many newspapers did in fact print the panel weekly, but they would have been paying for the daily panel and tossing out five each week, a luxury in which few papers would indulge. And the panel really needed the surrounding radio page to set its tone -- it would have been a little odd to have such a tightly focused feature run on a general daily comics page.

So despite the appeal of the feature its frequency hurt its chances, and it wouldn't have lasted long anyway. The fad for building homebrew sets had waned by the later 1920s as the price and quality of store-bought sets came down and went up respectively. The radio quickly changed from a hobby item to just another appliance.

My longest run of Today's Hookup ends on February 7 1925.

Comments:
This is brilliant! So funny, true and well drawn, and relevant today: see my post about your post: http://poparchivesblog.blogspot.com

Glad you like the feature Lyn, I think it's pretty nifty too. I also liked your post -- great observation of the parallel with computer support. Considering I do software support as part of my job, feeling a bit sheepish that the connection was lost on me when I wrote my post!