Obscurity of the Day: Colorful Colorado 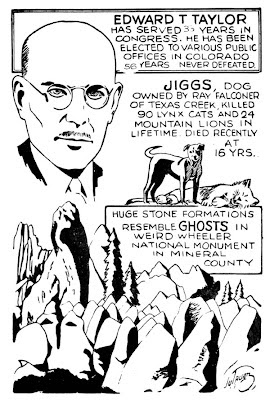 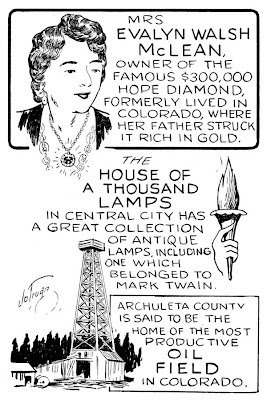 Awhile back I reported on an unknown feature that got a mention in E&P called Colorful Colorado. Soon after I was contacted by Van Truan, son of cartoonist Jolan Truan, with this information:

My father was a graduate of the Chicago Institute of Art in early 30s and did a correspondence course from Washington School of Cartooning in late 20s or 30s. He did commercial art for State Journal in Springfield, Ill and the moved to Pueblo and began working for the Star-Journal & Chieftain in 1935. During WWII, he did free-lance art in St. Petersburg for the Florida Electric Comp. and his own engraving company back in Pueblo. He was a fellow Kansasan and was friend of Walt Disney and his brother (they worked in the fields together). Walt asked him to work for him in California, but he didn't want to like in California, (being a Kansas farm boy). Big mistake?

The "cartoons" were done by etching chalk plates (old newspaper style) I even have a few of them. I have a ton of his advertisement cartoons that he did from the mid-30s to late 70s when he passed.

I asked about the use of chalk plates, which went out of favor back in the 1890s, and also whether the feature ran uninterrupted:

I think the series ran of and on. I know he didn't work for the Pueblo Chieftain during WWII, but not sure when he returned after the war.

My dad loved doing chalk plates and was considered one of the best in the country. The owner of the Pueblo paper was a tight wad, so chalk plates probably didn't go out until the late 40s. The local library has copies of all the newspapers since 1872, so I can find dates for you. I know he was still doing illustrations for the "Colorful Colorado" weekly edition in 1968, but it may have ended some time in 69. My fathers most famous chalk plate was of Will Roger's missing plane. It was done just after the wire announced his plane being missing. He did an immediate chalk plate showing the potential location of the plane crash and a portrait of Will. He had it published in the evening news. He completed it in approx. 30 minutes. The Pueblo Star-Journal (the evening Pueblo paper) scooped the Rocky Mountain News & Denver Post, they couldn't believe anyone could get the notice out that night.

The 1978 paperback was completed just after he died, he was completing the
cover, but someone else finished his design. Also, not all planned work was completed, since Ralph had not real artist to work with and he missed his artist buddy.

I was able to find a copy of the 1941 reprint book, from which the samples here are scanned. The 1978 book, by the way, is not really reprints of the feature but pieces by the writer with occasional cartoons.

It amazes me that Truan actually liked to work with chalk plates -- I never heard any cartoonist anywhere have anything but bad memories of them. Kinda neat to know that at least one cartoonist actually preferred them over more modern methods.