Obscurity of the Day: Dolly Dimple 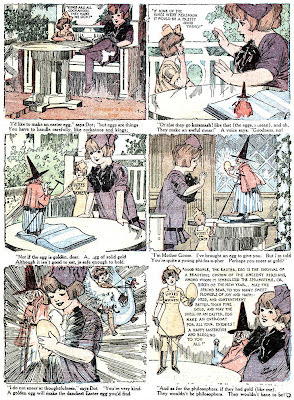 Yesterday we covered a comic from the 70s that was designed to appeal to a female audience. Today we'll look at one from the 1910s. Dan Beekman penned Dolly Dimple for the Philadelphia North American Sunday comic section from January 26 1913 to July 4 1915. The comic was generally the standard idea of a 'girl comic' of the time except that Beekman quite often included a message in favor of women's suffrage, a subject that was a major source of public debate at the time.

Beekman's strip was very well-drawn, obviously inspired by the likes of Violet Moore Higgins. On the other hand, the writing, much like a lot of the 'girl' strips, was a bit sappy. The strip seemed to be popular, often appearing on the cover of the North American's tabloid comic section (the NA was the first newspaper to print a true comics tabloid section, a format that would take off in popularity in the 20s and 30s). The strip lasted until the end of the North American's run of producing homegrown comics, and was later reprinted in the World Color Printing Sundays of 1920. World Color Printing purchased most of the North American's strip inventory and Dolly Dimple ended up being among the last of their material that WCP reprinted.

Dan Beekman has no other comic strip credits that I've been able to uncover. Some researchers have called him 'von Beekman', and I followed that convention until I saw enough examples of the strip that seem to be clearly signed 'Dan', not 'von'.

A really odd credit problem is that the North American printed an ad touting its Sunday strips on March 13 1915 and there they credited someone named Roy Griffith with the strip, a name that never appeared on them. Was this an uncredited writer or simply an error? I dunno.