Obscurity of the Day: Just Humans 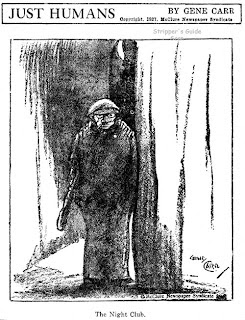 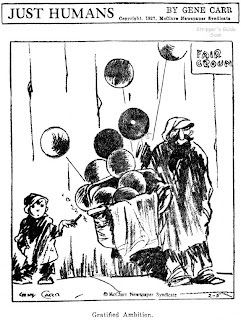 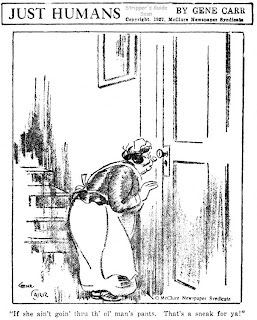 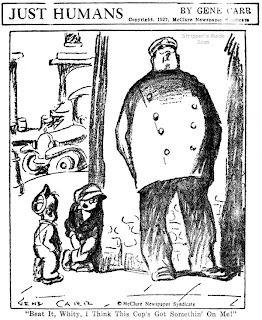 Gene Carr's resume is so long that I won't go into here. Suffice to say that he was among the most prolific of newspaper cartoonists if not always one of the most original. He specialized in Sunday strips in the 00s and 10s, turning out among a multitude of others some titles that are still at least vaguely remembered today, like Lady Bountiful and The Bad Dream That Made Bill a Better Boy. In about 1921 he took over the New York World's high class panel series Metropolitan Movies (marketed outside New York as Everyday Movies), and there seemed to find his muse.

In the hands of its previous creators, Metropolitan Movies had established itself as a humor cartoon with a streak of social commentary. No one familiar with Carr's newspaper work would have expected him to be able to continue this unique voice. Continue it he did though, and with a mastery that makes me wonder how he could have been wasting his time with lesser material all those years before.

For reasons unknown Carr left the World in 1924 and started working for the McClure Syndicate where in 1925 he created Just Humans, essentially a continuation of Metropolitan Movies. Carr by this time had honed his skills as a social commentator even further, and Just Humans was, if I may be so bold, a masterpiece. On a daily basis Carr was peeling away the layers of our society to show the human condition in all its foible and frailty. The grease pencil artwork fit the often dark mood perfectly, and Carr's pithy captions spoke volumes.

The feature, handicapped as it was by McClure's weak syndication, appeared in few papers and the panel was put to rest around 1929 (and was quite possibly in reprints even by then). Carr went on to become a magazine gag cartoonist but never recaptured, or at least was never able to sell, cartoons with the power and artistry that was exhibited in Just Humans.

Comments:
Hi, I have a bound collection of 16 Lady Bountiful and Phyllis 10 X 17 in. comics. It has a thicker inner title page but no date! The comics are from the New York Sunday World. I'm trying to figure out if these comics are from 1903ish or the 1917 reprint. Also, I'm a newbie -- please be kind..

my personal email is haycoxm@gmail.com

I'm afraid I'm unaware of a 1903 reprint book of Lady Bountiful cartoons. My money would be on the 1917 edition (which is pretty common), except that the dimensions you list don't match. One way or the other, apparently it's a coverless copy.