Obscurity of the Day: Private Buck 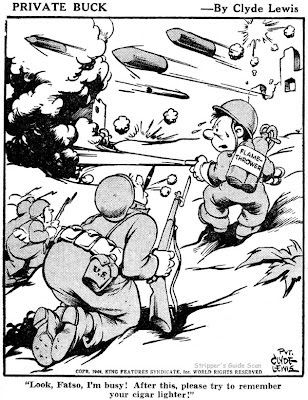 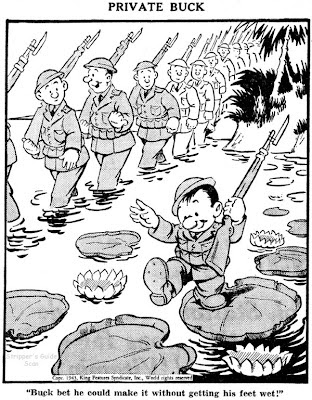 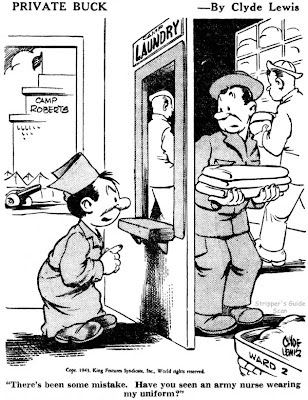 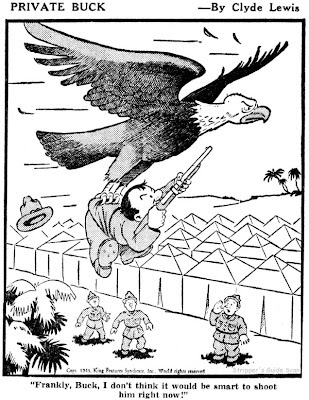 Clyde Lewis jumped ship from NEA, where he helmed the daily panel Hold Everything and the Sunday strip Herky, in early 1940. He went to King Features to start a new panel, much in the same vein as Hold Everything, titled Snickeroos. The market, overloaded with such fodder, didn't respond with much enthusiasm, though, and within six months Lewis had come up with a new tack. The panel was renamed Private Buck and a diminutive army private was installed as the daily gag fodder.

The change didn't liven up sales one iota, but Lewis gamely hung on with a tiny list of papers all through 1941. As of December 7th he suddenly had a big hit on his hands. As the US entered the war papers were scrambling for military material and Private Buck was happy to oblige. Unfortunately for Lewis, the US Army was also interested in him and he was inducted shortly after his panel turned into an overnight hit.

Like some other GI cartoonists, Lewis somehow managed to keep up the daily grind despite being overseas. Some Private Buck cartoons bear the names European locales next to Lewis' signature, indicating that he wasn't one of the lucky ones to score a desk job.

When the war ended, Private Buck went back to civilian life and the panel was rechristened Private Life of Buck. The feature shed papers pretty quickly, though, and was finally cancelled on April 19 1952.

Comments:
On the subject of war caroons (of which there were many): Harry Chesler had a magazine called Mirth of A Nation 'reprinting' war cartoons that seem to have been intented for syndication. I have to go upstairs to get the titles, but do you know if any of those were actually run somewhere?

The only Chesler strip that I have been able to verify on newsprint is his short-lived "Little Nemo" revival. It is obvious from a number of Chesler publications and paperwork that has surfaced that he was trying to do newspaper syndication, but his luck at it seems to have been pretty bad.

Ger, if you'll give me those titles I'll try running them through the newspaperarchive search to see if anything turns up.

My name is David. I have just purchased a comic called Mirth of a Nation from 1940 (I think). Is this the one that you were speaking of? If so, can you give me any information about it? Thank you for your time.
Respectfully,
David

I used to collect Private Buck cartoons from the NY
Journal American in the 1940s. But, as often happens, that are now 'gone with the wind.'