Obscurity of the Day: Zeke Smart 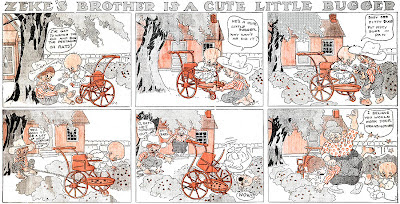 Zeke Smart had a respectable run in the Chicago Tribune Sunday comics sections from March 6 1910 to November 26 1911. The feature was created by A.D. Reed, a cartoonist with a lot of features under his belt in the oughts, mostly at the McClure syndicate. This strip is his next to last foray into newspaper comics -- his last was a very short-lived strip called After Dark in 1912.

Reed had a bad habit of not signing his work, so he may well have done other features that he just never bothered to sign at all. His unfortunate laxity in signing his work may explain why none of the standard comic strip reference works even make mention of him. (I'm sure Alfredo Castelli in Here We Are Again corrects this oversight, but I still haven't figured out how to order a copy of the book on his Italian website!).

Zeke Smart is an unremarkable strip, well-drawn but with standard plots. The sample here today, though, does point out just how much the cartoonists could get away with back then. Can you imagine a syndicate editor today encountering the word 'bugger' in a strip? Break out the smelling salts!