Obscurity of the Day: The Eternal Feminine 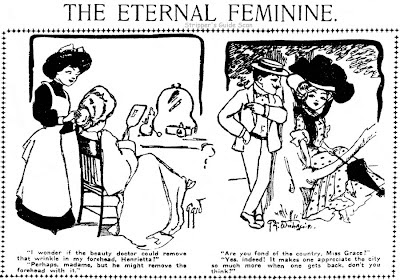 Here's one of those things that drives us researchers bonkers. The Eternal Feminine was a Hearst feature; it ran in the New York American from December 3 1903 to July 5 1904, then switched over to the New York Evening Journal and ran there just three times in the period from January 11 to July 15 1905.

So far so good. But the sample above is one I just found in the LA Examiner running in late 1906. So was the feature being produced at this late date but not running in the Hearst New York flagships, or was the Examiner just plugging a hole using old stock? Without easy access to the American and Journal microfilm there's no way to know, and if this sample isn't found in the New York run that opens up a whole can of worms, since it means the New York papers weren't running all the Hearst material even at this early date, when this researcher at least has always assumed they were reasonably dependable. I'm guessing, though, that the Examiner pulled this item from old stock since it's the only one they printed in 1906.

Ah well. On to the series itself. Grace Weiderseim, better known to us as Grace Drayton, penned these panels right near the start of her long relationship with Hearst. It was her first non-Sunday series for the company. Drayton, of course, is best known outside comic strip circles for her Campbell's Soup cartoons.

Comments:
Hi Allan,
as you surely understood reading my suspiciously frequent comments, it is a moment in which I desperately try to find any and every excuse ** not** to do my regular job, i.e. writing my comic series “Martin Mystère”, now in its 25th year of publication.
I do this, of course, in order of not humiliating American production: if MM had been published at the rate of - say - “Mandrake” (one 4 panel strip a day, and one 9 panel page a week, beginning in 1934), it would be already well over year 2100, as in Italy we consume tons of pages each month. So - trying not to overdo - I spend my time telling things that you already know, as the following:

On NewspaperArchive.com - Advanced search - Exact date: 1904 January 16 + Exact phrase: Wiederseim (if you just put “Wiederseim” - “any date” you will NOT get that particular page, also if you should: mystery of that maddening site), you’ll find the sample of “The Eternal Feminine” I used in “Eccoci ancora qui” (page 227). It was published by the “Fort Wayne News”, and, at the time, I found many other ones that must be in a DVD I put somewhere (i.e. “which is lost forever”). This happened when “NewspaperArchive.com” was “NewspaperArchive.com” and not the mess of nowadays: no use searching for those pages today.
This to say that “The Eternal Feminine” was widely distributed, together with many “fillers” from the “NYAmerican” and “NYEvening Journal”, an interesting and esoteric production to which I hope you’ll devote some space in your blog. I say “distributed” and not “Syndicated” in the modern sense of the word, as, confronting dates, I **suppose** that such material was sold in packets, to be published whenever there was a space to fill, often months after the original publication. I ** imagine** it was the case also for Hearst papers, such as the “LA Examiner”.

Anyway, if the “LA Examiner” had published something before (or independently from) the “NYAmerican”, it wouldn’t be such a surprise. The “San Francisco Examiner”, for instance, published much material that was not in the NY paper, beginning with Swinnerton’s Bears, and it happened before 1900. I used to consider it as a given fact.

End of the comment. Now I have the excuse to say that it’s too late to begin writing, and that I’m tired and I’m going to sleep.
Good night
Alfredo

Hi Alfredo -
With all best wishes to the legions of Martin Mystere fans, we are awfully happy to have you taking some time off to visit and participate in Stripper's Guide.

As regards the early Hearst material, I did realize that it was distributed in some manner to non-Hearst papers as well as those within the chain (and I agree that syndication isn't the proper term for it, as the distribution was undoubtedly in bulk packages with no specific running dates in mind). But for a Hearst paper to run the thing so long after its NYC running dates is ... unsettling.

While indexing the NY Hearst papers I found many, many instances where a feature (and Eternal Feminine is a good example) would run only occasionally on widely separate dates. Since these features were mostly done by freelancers, it makes me think that perhaps Hearst purchased a batch of, say, 12 strips, and then ran them only when they didn't have enough material from their in-house cartoonists. This is all fine and dandy, but when we put distribution into the mix we might have all the episodes of the strip running immediately on being received in LA, whereas they get piddled out over months or even years in NY. Thus any start and end dates assigned are essentially illusory, whereas I vainly hoped that the NY dates for the Hearst material produced there could be considered more definitive than perhaps they really are. Logically, I knew that this sort of thing was probably happening, but I have very rarely seen instances like this one where a Hearst paper runs the material so far out of date. And in fact, running late is okay, but I would be disappointed, if not terribly surprised, to find NY material running elsewhere before the NY run. So far I haven't run into that situation with this early material.