Obscurity of the Day: Old Bill 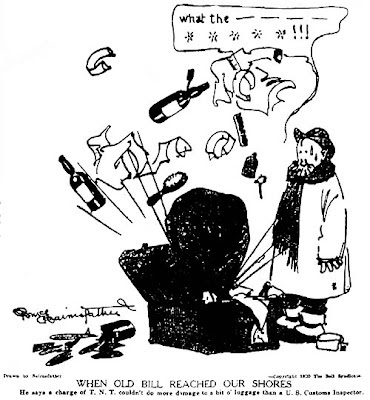 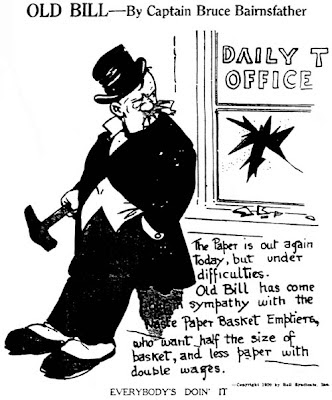 For the Old Bill fans out there, let me set one thing straight right away -- I'm not calling Bairnsfather's Old Bill character an obscurity, rather the obscurity is this newspaper series.

Okay, now we're starting on the right foot. For those of you not in the know, Old Bill was a character created by Bruce Bairnfather, a British soldier, during World War I. Bairnfather's trench-drawn cartoons were run in British newspapers and quickly became a huge hit -- much in the same way as Bill Mauldin's did here in World War II. The first reprint book of the Old Bill cartoons, titled Fragments from France, was a huge international bestseller. After the war Bairnsfather continued drawing his Old Bill character and it remained popular in Britain through the 20s and 30s.

In an attempt at rekindling Bairnsfather's popularity in the States several syndicates tried distributing Old Bill cartoons here over the years. They were, without exception, syndication failures. Our subject today is the first of those syndication attempts, this one by Bell Syndicate. This one is exceedingly rare -- I'd heard of its existence from a Bairnsfather researcher awhile back, but had never seen it with my own peepers. However, just the other day I happened upon the series while indexing the Philadelphia Record. It was a weekly panel that ran there from August 1 1920 to January 30 1921 (of course it might have run longer elsewhere).

I chose a few of the better cartoons to run here as samples, but the problem with the series was its British sensibility - quite a few of the cartoons in the run are written about peculiarly British subjects in a peculiarly British way, making them all but unintelligible to an American audience. This even though the first cartoon in the series (the first cartoon above) seems to be indicating that Bairnfather was either in the U.S. to create the series, or at least was creating these cartoons specifically for the American market. A mystery, that!

“Old Bill” was created in the cartoon known as “The Better ‘Ole” for the English “Bystander” magazine of Xmas 1915.

The Bairnsfather cartoons were first published in the USA by “The Bellman” around 1917. Many of them were published as sample of Bairnsfather’s art in various American newspapers (e.g. the “Chicago Tribune”, 1917 JAN 27, “Cartoons of Bairnsfather”).

- A first series of Bairnsfather cartoons, with rotating titles of which the most recurring was “American Fragments” was syndicated by “The New York World”’s Press Publishing Co. from 1918 JAN 20 to 1919 ? ?. Cartoons in half-tone from the “The Bystander”, set in European trenches.

- A second series is the Bell Syndicate you uploaded to the blog. I have samples as early as 1920 APR 25. “The Hartford Courant” announced the beginning of the series on May, 23, 1920. The cartoons come from the English magazine “Fragments”, and feature a home-set version of OB and his family (wife and son OB jr): the war was in fact over. It’s possible that Bairnsfather did some special panel for the American market: he was often in USA to follow the theatrical version of “The Better’Ole”. And in fact….

- A third series “Old Bill’s Adventures in America” was drawn by Bairnsfather especially for the American audience. It was in strip form, and was released by King Features Syndicate from 1923 DEC 24 to sometime in 1924.

- A fourth series alternatively “Old Bill and Son” and “Somewhere in England” with half-tone cartoons set in WW2 from the English magazine “The Illustrated” was released by Bell again from 1940 FEB 4 to 1942. See article in your blog “Bell Acquires ‘Old Bill’". The article contains an error by the chronist “of yore”, as he says that Bell had already published OB in 1914; impossible because neither the character nor Bell existed at the time: in fact Bell published it in 1920.

Last but not least:

- A fifth series of cartoons/illustrations were made especially by Bairnsfather for “Star and Stripes”, circa 1943.

Hi Alfredo -
Thanks much for the additional info! Do you recall the papers where you got the dates for the 1st and 3rd series?

Regarding the first, I've indexed the Evening World and they weren't there. Was this one of the few series that they ran in the Morning World?

The 3rd and 4th series I have documented, but I've seen them all running under just the "Old Bill" title. The Bairnsfather researcher I corresponded with said, if I remember correctly, that some papers titled the 4th series "Old Bill and Young Bill".

Hi, Allan. The beginning of the 1st series for JAN 20 was announced in the “Boston Globe”, 1918 FEB 17. It is posssible that the cartoons ran in the Morning World, and franky I don’t know: in fact I found them on the “Boston Globe”, and they bring the “Press Publishing – New York World” Copyright.
The third series was announced by "The Hartford Courant" on 1940 FEB 4. I found the titles “Somewhere in England” and “Old Bill and Son”. Maybe newspapers changed the titles. You can see samples of the above cartoons on the PDF I sent you some two weeks ago.
Best – Alfredo

Hi Alfredo -
Thanks again for the info; I was interested in your source for the third (King) series from 1923-24. BTW, I see access to Proquest was quite the boon for you! :-)

Hi Allan,
for what concerns the 3rd series - "Old Bill in America" - the main source was the old "Stripscene" magazine - alas, I don't have the issue at hand - and some hard clippings I found. My main source isn't Proquest, but www.newspaperarchive,com
Alas, strange as it may seem, every time their "improve" their interface (now they're unfortunately "impriving" it again) things grow more complicate and difficult to get.
A presto - Alfredo

Hi Alfredo -
I agree about newspaperarchive. This latest 'enhancement' seems to have broken the search function all but completely. It's been weeks since I've been able to get useful results from searches.