Obscurity of the Day: Jet Scott 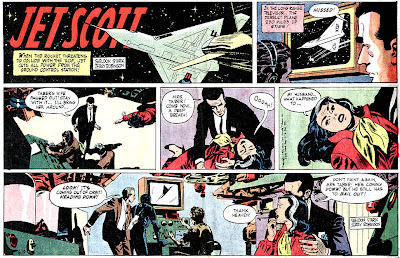 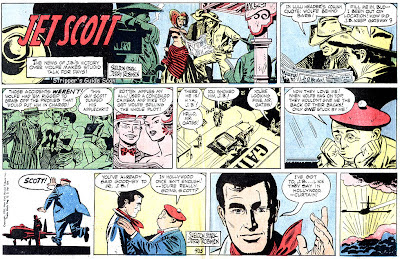 The New York Herald-Tribune was a great place to read excellent comic strips in the 1950s. Too bad their sales force seemed to have little luck in selling them to other newspapers. Among the delightful strips that appeared in the H-T and were thus doomed to obscurity was Jet Scott.

Writer Sheldon Stark proved his chops as the ghost writer on the Inspector Wade strip, and Jerry Robinson of course had a lot of comic book art under his belt. This proven combination came up with a story about a mysterious CIA operative who worked for the 'Scientifact' office as sort of a troubleshooter. The storylines flirted with science fiction, being set in the near future, but seemed to shy away from anything really exciting in that line. Mr. Scott was too busy with the standard 1950s era bugaboos of stolen nuclear secrets and uncovering double agents.

Stark's scripts were well-written though disappointingly conventional, but Robinson's work, especially on the Sundays, was excellent if perhaps a little cold-blooded. Seems to me Robinson was trying to straddle genres in the art style he adopted. Tempering his more vigorous comic book style, he tried to add more polish by emulating the Rex Morgan/Judge Parker school of soap opera art. The results bridge the gap from realism to surrealism.

Jet Scott debuted on September 28 1953 with a Sunday starting at the end of that first week. It lasted exactly two years, ending with the Sunday of September 25 1955 (the second Sunday reproduced above).

Comments:
Hello, Allan-----It was quite striking how much of a sea-change occured at the Herald-Tribune about 1950. It went from the dullest line-up ever (Betty, Mr. and Mrs., Peter Rabbit, Skeets, etc.) to the dynamic collection of the 50's.These new strips didn't always live up to their potential, but, it was nice to see them trying. Too little, too late. ---Cole Johnson.

A dreary line-up I'll agree, but let's not throw the baby out with the bathwater. The art on Betty was superb!

That would be circa 1948 -- again, the work of previously discussed HT comics editor Harold Straubing.
Jay Maeder

Finally, mu most looke for strip from the fifties. Ever sinc e I saw a daily reprinted in Robinson's excellent history of comic strips (recently reprinted as well) I was curious about this one. When e-bay opened up the possibillities of collecting for out of US fans, I started looking for it but otheer than a couple of sunday, I never got a lot of them. The strip is very well drawn, but I have to add that the later sundays I have are not as good as these two... and the whole doesn't hold a candly (imo) to the work Robinson was doing from 1951 to roughly 1956 for Timely/Atlas. In this period he was also teaching comics to a new generation of artist. After breaking up his partnership with Mort Meskin, he worked on his own for the first time. His comic book work is similarely slick. In fact, the misture between comic book and comic strip styling you see here, is visible in his comic book work as well. If the stories are any good, I'd buy a collection at once. I hope someone will reprint ist sometime.

Reprinted they have been--just out from Dark Horse.