Obscurity of the Day: Zimmie 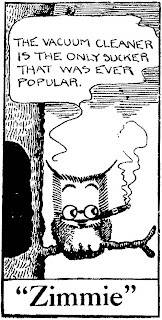 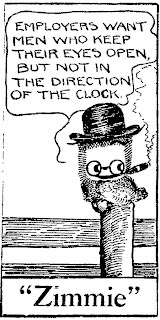 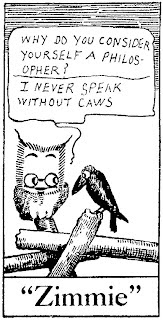 Your faithful blogmeister, always happy to kill two birds with one stone, tells the tale about Zimmie on the blog today because someone wrote to me privately asking about it.

Zimmie, who appears to be an owl, is a knock-off of the locally famed St. Louis Post-Dispatch Weatherbird. Weatherbird, an overfed cardinal, was created in 1901 by Horace "Harry" Martin. The feature continues today, making it without peer for longevity of a daily panel cartoon. The Weatherbird, ostensibly a cartoon reporting the day's weather forecast in an entertaining manner, more typically provided pithy philosophy and commentary on politics and local events.

Harry Martin decided to parley his local hit on the national stage. He went to New York and did lots of bird-related cartoons, mostly for Hearst, from 1903-12. Martin seems to have been canned from Hearst in 1912, and that's the point at which Zimmie appears (first I've seen are from May 1912), syndicated by Baltimore's International Syndicate. The Zimmie cartoons are never signed or credited, but the art style certainly seems to be Martin's.

Zimmie ran until at least August 1913. After that Martin only shows up once more that I know of, doing a minor feature at the New York Globe in 1918.

Comments:
Hello, Allan-----My two and a half cents-----I don't think ZIMMIE was the work of Martin, rather the artist just used Martin's style of bird face. This character would be pretty unusual for Martin, his birds are bigger and wear clothes. The letters don't look like his either. It also would be odd for a nationally known big-time cartoonist to do such a humble,unsigned International Syndicate thing. Besides, Martin for some months in 1912 was still employed by the Post-Dispatch doing the full-page ADVENTURES OF THE WEATHER BIRD in their Sunday section.-----------Cole Johnson.

Weatherbird in the SLPD Sunday section in 1912? I only have it indexed in 1903 (I stopped indexing after 1904 because it seemed to turn into the normal NY World section). Even by then the Sunday was by Oscar Chopin, Martin having (ha!) flown the coop. Can you tell me more about the 1912 Sunday?

Seems unlikely to me that Martin was still in St. Louis since he worked for Hearst doing minor daily features in 1903-12.

A nationally known cartoonist? None of his features made much of a ripple as far as I can tell. No reprint books, anyway. Do you really consider him a bigtime guy?