Obscurity of the Day: Zeus! 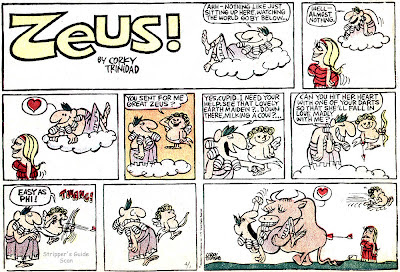 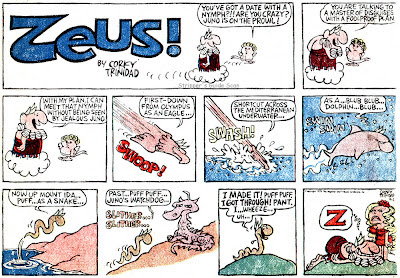 Corky Trinidad, editorial cartoonist for the Honolulu Star-Bulletin, put his toe in the water of syndicated comic strips when he created Zeus! for the Register & Tribune Syndicate. The strip starred the gods of Mount Olympus. Trinidad might have assumed too much intelligence on the part of the American public, because many of the gags assumed that readers had a basic knowledge of the personalities of Greek gods. I suspect this was the strip's downfall
as this is definitely not on the average school curriculum hereabouts.

Zeus! ran from April 1 to December 8 1979 as a Sunday and daily strip. In a syndication oddity that I don't understand, the Sunday was copyrighted to Murdoch News Features while the daily was from the aforementioned Register & Tribune.

Corky Trinidad is still active in editorial cartooning, and offers reprint books of Zeus! and an excellent strip he did for Stars & Stripes, Nguyen Charlie. Go check out his website.

Comments:
Since you mentioned local strips few weeks ago and since you brought up Stars and Stripes.

The paper in questions runs some of their own weekly strips on the Scene section every Sunday. They are as follows:

I actually have the first strips for the above, so I know the dates.

They also run a strip called "Downrange" by Jeffrey Hall. That began sometime around 2005 and if you search for that strip, yes, it's actually a stick-figure comic.

Hi Charles -
Thanks very much for the info on new S&S strips. That brings up an important question for the Stripper's Guide index. Since SG only lists strips that ran in the U.S., does S&S have a domestic edition? If not then I really shouldn't list any of their features.

No idea, although the headquarter is in Virginia, near Washington D.C. You could probably pick up copies if you live there.

Hi Charles -
I went to the S&S website and they only seemed to be offering subscriptions of two editions - European and Pacific. Sorta seems like there is no domestic distribution. Which is kinda weird since the strip "Jenny" seems to be intended for military wives who presumably are mostly back in the states.

Hi, Allan. You're right about the "Jenny" audience being mostly stateside. I, however, live in Okinawa. I thought it'd be best to test the waters with a generic base in Florida before sending anyone to an overseas assignment.

The characters discuss their previous PCSes to/from Germany and we now have a character packing up for a PCS to Japan.

Even though the S&S doesn't publish stateside, the audience shares/reads online. I'm trying to keep the topics of the episodes generic enough that any spouse can relate. My e-mail seems to bear that out so far but I had to get somebody over here to experience what I've dealt with over the past couple of years...therefore, Cassie will take the plunge and be the token fish-out-of-water spouse (as soon as she figures out how to PCS, that is!).

Thanks for the mention in your blog. I'll definitely keep reading.

Hi Julie -
Thanks for the info and best of luck with your comic strip. Do let us know if you ever publish a reprint book -- seems like interesting reading, even (or perhaps especially) for those not in the same situation. I for one enjoy strips that give me a peek into different lifestyles and livelihoods.

Good afternoon Mr.Holtz.
Thank you for mentioning me in your blog, i hope you enjoy reading the strip. I do regret that the Stars and Stripes do not print our strips in color, it definetely takes away from the intended full effect, the colored strips can be seen on my site.
keep up the good work! GOD SPEED...

PS: Do you have any early work prior to EC Comics from Harvey Kurtzman?