Obscurity of the Day: Ben Swift 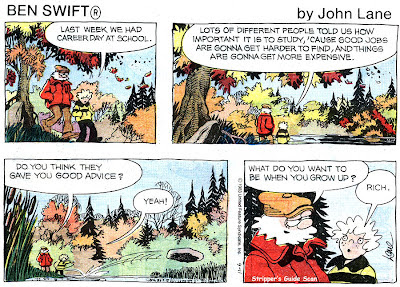 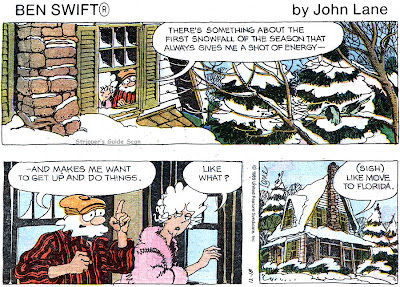 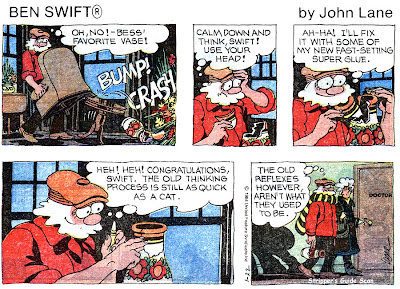 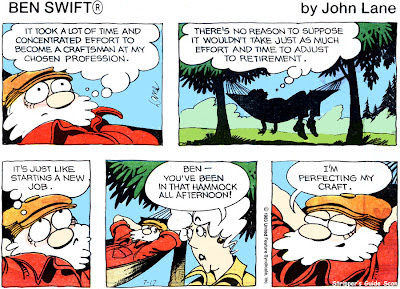 Ben Swift was one of the early entries in the now burgeoning genre of strips about older folks. Ben was a retired newspaper editor living in a small but comfortable country home, and his main foils were wife Bessie and grandson Petey. Although the strip was rarely laugh-out-loud funny, Ben's low-key observations on life were pretty consistently entertaining and often quietly captivating.

John Lane, the creator of Ben Swift, was a longtime art director for United Media and no stranger to the comics page. He handled the art on many NEA and United Features limited-run strips, including three of NEA's Christmas strips. He gave up that job to create Ben Swift which started on February 16 1981. The strip got picked up by a decent number of papers right from the start but from what I've seen many of them didn't stick with the strip for very long. Ben got his gold watch on February 17 1985.

A clue to the strip's lack of success can be found reading an interview with Lane printed in Cartoonist Profiles #50 (June 1981). In response to a question from Jud Hurd as to the genre of the strip, Lane says, "After the [original] retiree promotion was out, someone said, "How embarrassing that is -- you don't have to attract senior citizens to the newspaper -- they devour the newspaper!" But the strip isn't just about a retired person ... it's a family strip."

Sounds like Lane was insecure about his choice of subjects and a few blustering editors had convinced him that a strip about a retiree wasn't marketable. In response to these criticisms, ridiculous as they were, Lane was adding a whole raft of additional characters to the strip diluting its original appeal. My guess is that things all went downhill from there.