Obscurity of the Day: The Boys in the Other Car 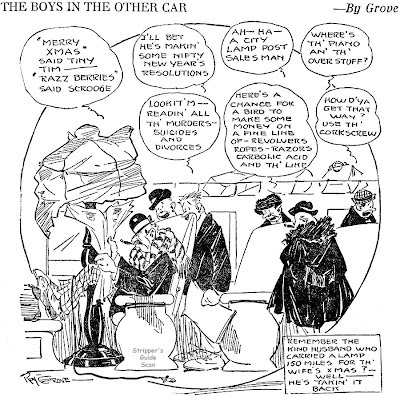 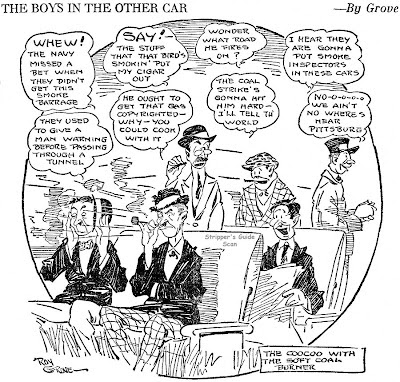 Roy Grove, a cartoonist in the NEA stable from 1917 until the mid-20s, did his best work on this daily panel, The Boys In The Other Car. The cartoon was derivative, taking its cue from features like Indoor Sports and Eddie's Friends, but a good read nevertheless.

The cartoon was about the ribbing and playful banter that occurred on commuter trains. In those days when the suburbs were beginning to sprawl across the American landscape businessmen seldom owned cars, so their daily commutes were by rail. Each car on the train evolved into an informal club with twice daily get-togethers.

Grove had a good ear for dialog and the slang-laden snarky badinage rings true. It's also pretty darn funny stuff. I wonder, though, if anyone other than a few of us retrospective types can even make sense of the subject matter and archaic jargon in this feature.

Comments:
For whatever reason I was checking out Roy Grove a few weeks ago.
As J. Roy Grove he has a page at the Cleveland State University Library where they reproduce some of his WWI cartoons as published in Scripp's Cleveland Press.
http://images.ulib.csuohio.edu/cdm4/results.php?CISOBOX1=cartoonists&CISOFIELD1=CISOSEARCHALL&CISOOP1=any&CISOROOT=all
or http://tinyurl.com/ywj6w9

He also seems to have been a sports writer for NEA, specializing in golf. Later, in 1930, he was doing an illustrated golf column for Central Press titled "From Tee to Green".
That Library page above has some later attempts by him to get syndicated in the 1930s with something called the Jeburn Features Syndicate. You got anything on that JFS?

A staffer in charge of that page sent me a query about Jeburn few months ago. Unfortunately I have never heard of it and have never seen these Grove tryouts reach the published page.