Obscurity of the Day: Merely Margy 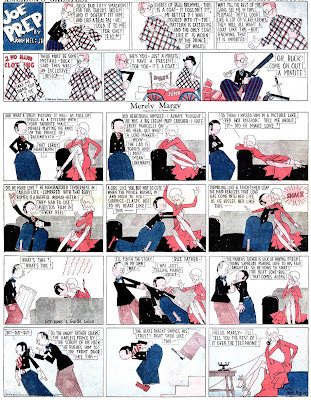 Yesterday we covered John Held, Jr.'s Oh Margy, so let's follow that up with his better known follow-up, Merely Margy.

Merely Margy is admittedly not nearly as obscure as Held's prior effort, but its appearances were limited mostly to Hearst papers, and even a number of them didn't run it -- despite Held's name value it seems to have been considered one of Hearst's B strips. It was further hobbled by Held's flappers, considered rather risque for newspapers. Merely Margy rarely ran on the daily comics page, considered the domain of kid-friendly strips. Held's efforts were usually printed on women's pages or other more adult-oriented sections of the paper.

Merely Margy started in May 1927, hard on the heels of the demise of the Oh Margy panel, as a daily-only strip. The feature was pretty lavish on space; although it was a standard 6 columns wide it was very tall, probably half again as tall as a standard strip. The extra space was devoted to a typeset story below the artwork. The text stories were penned by Lloyd Mayer who was seldom credited on the strip. The full title of the daily, befitting its jumbo size, was Merely Margy, An Awfully Sweet Girl.

After two years of lackluster sales, Hearst decided to move Margy over to the Sunday comics. The daily was cancelled in late 1929 and a Sunday page was introduced on October 6. The Sunday added a topper titled Joe Prep and dropped the under-panel storytelling. Not to be squelched, Lloyd Mayer continued his wordy ways and the strips was filled to overflowing with overstuffed balloons.

Held, now faced with a strip that was to be featured in the even more kid-centric Sunday funnies, didn't alter his approach. Margy's matchstick gams were still all akimbo, giving peek-a-boo glimpses of anatomical parts normally discreetly covered outside the debased pages of the New York Evening Graphic.

Most editors, faced with a strip that was bound to provoke snitty letters, simply didn't run the strip. Others put the strip on the back page of their magazine sections, a bastion of more adult-themed material. Others, apparently bold or clueless, ran the strip right next to Just Kids and Barney Google in the Sunday comics section.

Held's appearances in the Sunday comics lasted less than a year, ending on September 21 1930. The comics just weren't ready for his adult humor (they still aren't today). Margy would make a few more appearances on Sunday magazine covers in the early 30s, but we'll talk about those some other time.