Obscurity of the Day: Oh Margy 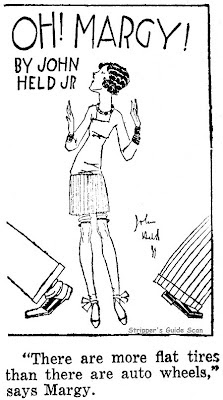 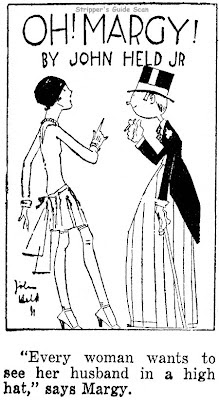 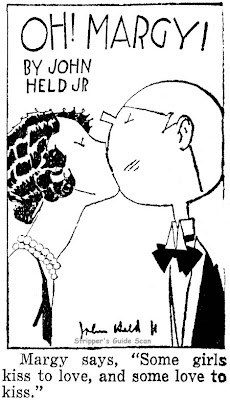 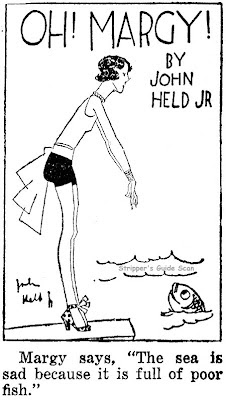 Eighty-some years later it might appear as if Oh Margy is yet another attempt to duplicate the success of Ethel Hays' Flapper Fanny. But John Held Jr., famed graphic chronicler of the roaring twenties, actually started his feature a year before Flapper Fanny. Despite the marquee name, though, Oh Margy ran in few papers and made little impression.

Perhaps it was because it was syndicated by the then tiny United Feature Syndicate. UFS was only notable in the mid-20s for its bargain basement production work, sending out badly cast stereotypes of minor features to small papers that couldn't afford better suppliers.

Or maybe it was because Held, already beginning to be recognized as an icon of the age, was unwilling to put a lot of effort into the tiny panels. The drawings certainly appear to be vintage Held, if not particularly imaginative, but the captions have a lot of klunkers. Perhaps Held was already farming out the writing, as he did later with Merely Margy. We do know from Shelley Armitage's biography of Held that the panel was ghosted for awhile by such supremely unlikely replacements as Doc Winner. Why Held signed up with UFS in the first place is a bit of a mystery. Certainly he could have, and eventually did, command the attention of the major syndicates, and he was in constant demand for high-paying magazine cartoons throughout this period.

Oh Margy ran as both a daily and Sunday feature. The Sunday, however, was not of the color Sunday funnies variety, just a larger version of the black-and-white daily. It started on April 6 1924, followed by the daily on May 5. The daily ran in few papers, but the Sunday version is downright rare. The feature ended on May 22 1927, the daily ending one day earlier. These dates are all based on the San Francisco Chronicle's run, one of the few major papers that ran and stuck with the feature over its three year term.