Obscurity of the Day: Just Little Ones 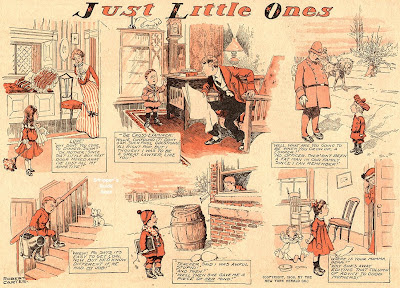 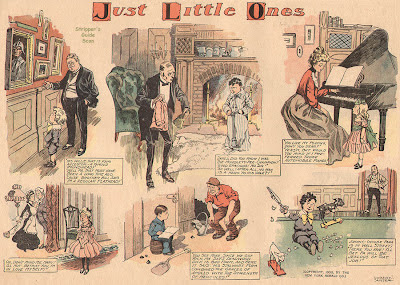 Just Little Ones was the New York Herald's answer to the popular T.S. Allen kid series of the New York Journal. It really wasn't much of a contest though -- Allen's style was sparse and rather basic, while Robert Carter's Just Little Ones was lush and illustrative. Carter's cartoons looked like they could have been reprinted from Puck or Judge, while Allen's were strictly newspaper cartoon fare. Allen's characters were hard-edged street urchins, a good fit for the Journal's audience, while Carter's were mostly Little Lord Fauntleroy types keeping in line with the Herald's more affluent readership (though the Herald was originally a populist penny paper, the advent of the World and the Journal had pushed it to seek a new higher-brow audience).

Carter's captions were devilishly funny, be sure to read the cartoons above! Carter's kids are miniature versions of their hoi polloi parents and their utterances foreshadow the style of Shulz's Peanuts. The middle one in the second cartoon, featuring a sly caricature of a wee W. R. Hearst, is a particular delight -- one of the funniest cartoons that I've seen in months, and I read a LOT of cartoons!

Robert Carter was better known in his day as an editorial cartoonist, and he was a spectacular one. His lush detailed drawings, mostly for Hearst and then later for the Philadelphia Press, were widely admired and reprinted. His flirtation with the newspaper comic strip was fleeting -- he did this feature for the Herald from August 17 1902 to November 1 1903. In 1903 he produced two true comic strip series, one for the Tribune and a really delightful one titled Coffee and Sinkers for the McClure Syndicate. I must dig out an example or two of that one to share.

Robert Carter's career was cut short when he died at the young age of 44 in 1918. Robert's memory is sometimes besmirched by being confused with "Ad" Carter by comics historians, including, I sheepishly admit, myself. Thankfully Arnold Wagner got me set straight on that point.