Obscurity of the Day: Just Kids 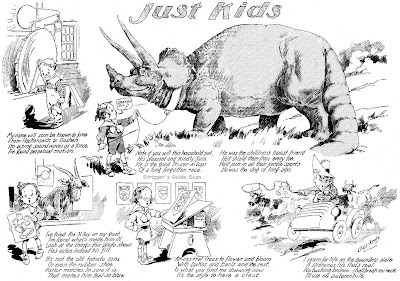 Here's yet another version of the most used comic strip title of all time, Just Kids (6 separate series by my count). This one takes the prize as the first ongoing use of the title and also as the shortest-lived version.

Charles Reese's elegantly drawn version ran from November 9 1902 to February 8 1903 in the New York Tribune's Sunday comic section. In a very odd coincidence, T.S. Allen picked up the title for his series in the New York Evening Journal starting the very next week. One has to wonder if there isn't more to the story.

In the short period of 1902-04 Reese really made the newspaper rounds, creating short-lived series for the Tribune, the New York World, Boston Herald and Philadelphia North American. I also seem to recall that he did a bunch of one-shot strips and panels for the McClure Sunday section in this period. He did a lot of straight illustration work as well.