Obscurity of the Day: The Little Woman, Way Out West and Jimmy And The Tiger 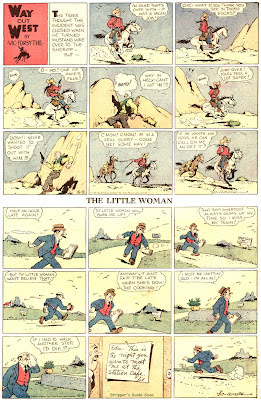 Buckle up, folks, this one's going to be a bumpy ride.

Vic Forsythe first made his presence known to comic strip readers back in the 1910s with a string of features for the New York World. In those days he divided his time between strips and sports cartoons. Late in the teens he struck a minor vein of gold when he created Joe's Car. The strip, starring Joe Jinks, was initially about the trials and tribulations of car ownership, but Forsythe branched out pretty quickly to have Joe engaging in various minor-key humorous adventures. The strip was renamed Joe Jinks in 1928 and Joe got himself into the boxing game, managing a fighter named Dynamite Dunn.

In 1931 the New York World was consolidated by Scripps-Howard and effectively ceased to be, and all its features were picked up by United Feature Syndicate. Perhaps Forsythe chafed at the new management or maybe his pay envelope took a turn south (Scripps-Howard was notoriously cheap), but in 1933 he abandoned Joe Jinks to Pete Llanuza and sought greener pastures.

Apparently he found some hay in the Hearst camp, where he created a new strip that was somewhat similar to Joe Jinks. It was titled Way Out West, and starred a Joe Jinks clone named Jimmy who goes west hoping to find gold. What he finds instead is a rootin'-tootin' cowboy who goes by the name "The Texas Tiger". Way Out West started on January 7 1934.

Though this Sunday strip often reads as if there was a daily adjunct I've never found any evidence of a daily from early in the run. Almost a year in, though, a daily does finally appear. It's not titled Way Out West, though, it's called Jimmy and the Tiger. This badly titled strip (sounds more like a kiddie strip to me) seems to have premiered on November 12 1934. In the daily version Jimmy grooms Tiger as a boxer -- deja vu! The Sunday strip, meanwhile, focuses more on the wild west exploits of Tiger, and Jimmy is left out of the mix more and more.

The Sunday strip initially ran with a topper titled Bunker Bugs, a strip about golfing. But on April 21 1935 a new topper premiered titled The Little Woman. This strip brought Jimmy home where he played the harried husband in a domestic comedy. Although I call this a topper, Forsythe divided his two Sundays as a pair of half-pagers, a marketing ploy that made it easy to replace one or the other with a half-page ad, something that often happened with this strip.

Two months later Forsythe's daily, Jimmy and the Tiger, was renamed The Little Woman. This replacement premiered on June 17 1935. Though the title was changed, the storyline stayed the same, with Jimmy and Tiger still in the boxing game. The daily strip ended December 5 1936 with the Tiger getting married.

The Sunday versions of Way Out West and The Little Woman both supposedly ran until November 22 1936 according to the King Features Microfilm Catalog, but I've never seen one later than June 21st. Given its status as a filler strip, the November date may be right. Has anyone seen the later ones?

And that's the convoluted story of Vic Forsythe at King Features. He returned to doing Joe Jinks for United in 1937 but that didn't last long. According to Ron Goulart he gave it up, this time for good, because of illness.

Thanks to Mark Tague who sent me an email asking about Forsythe's stint at King. I had the timeline all balled up in my Stripper's Guide index, but his questioning led me to do some further research to neaten things up considerably, even if there are still some unknowns.

Comments:
Allan, when I sent the email off to you asking for information about Vic Forsythe and his King Features strips, I was surprised and pleased by your very quick reply. Now I'm even more surprised that your very next blog entry was a further explanation. All seems much clearer now. Thank you.
In the time since I emailed you with the questions, I managed to pick up April 1-June 15, 1935 of Jimmy and the Tiger. The story was barreling along with Jimmy (last name is Goober, by the way) trying to get fights lined up to build up Tiger's record so they can get a big payday in New York. Jimmy even picks up another fighter, a comical counterpoint to The Tiger, Jawbone Jerry. Then suddenly on May 14th, with no foreshadowing whatsoever, The Tiger decides to quit the fight game. The Tiger wants to go to the ranch owned by Jimmy's dad, where he had been a ranch hand and use his boxing winnings to buy into the ranch. As soon as that's accomplished Jimmy heads back east and reunites with his wife, Dilly, The Little Woman herself.

So, abruptly between May 14 and June 4, the strip completely drops the boxing storyline, returns The Tiger to the ranch to be available for the Way Out West Sundays and Jimmy returns to his wife so that the daily can now be The Little Woman. The last strip I have, June 15th, is still titled Jimmy and the Tiger, but it has become a domestic strip. This abrupt change has the flavor of strong editorial pressure from the syndicate.

Hi Mark -
It didn't stick, though. Reading through some dailies of The Little Woman I find that Jimmy and Tiger were still setting up boxing matches. In fact they are going to New York in December to set up a match when Tiger sort of out of the blue gets married and the strip concludes.

Hi,
I am a local historian, and I have what I think is a strip written for the local by Vic. The strip was publised in 1925. If you are interested please contact me.
Thanks,
Eileen

Hi Eileen -
If you'd like to send a pic my email address is listed in the left sidebar.