Obscurity of the Day: Teddy, Jack and Mary 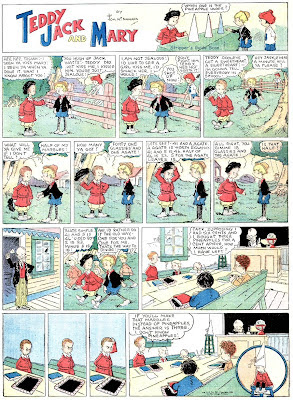 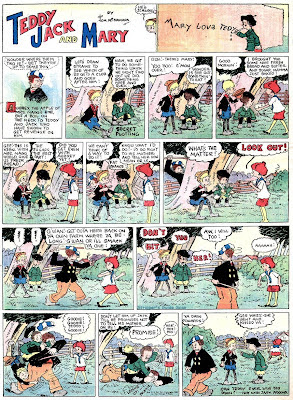 After Tom McNamara's long-running Us Boys feature ended (use the Search function to find a month long reprint of that strip here on the blog) he got a berth at the Chicago Tribune with a very similar feature titled Teddy, Jack and Mary. The Sunday-only feature commenced on May 19 1929, about six months after the end of Us Boys.

I'd love to know if McNamara got canned at Hearst or if the Tribune offered him more money. If the latter then McNamara really got shafted, because after the one year of appearing in the Trib McNamara became the subject of a reader referendum. For three months his strip alternated with a new Sunday kid feature titled Little Folks by Tack Knight. Readers were invited to vote for the strip they liked best, and when the ballots were counted Teddy, Jack and Mary got a very public heave-ho in favor of Little Folks.

What a way for McNamara to end his long career -- a flogging at the hands of the readers themselves. The last Teddy, Jack and Mary, in which McNamara did not get to tell his audience to stick it where the sun doesn't shine, appeared on August 24 1930.

Hello, Allan----I don't get how mediocrities like McNamara get long national careers. His drawing talent was quite low--he couldn't do expressions, body proportions, clothes that earthlings would wear, or proper perspective. His characters are unappealingly whiney, always being intimidated and blubbering. Punchlines, even lame ones, aren't necessarily even there. Still, when the OUR GANG comedy series began in Hollywood, producer Hal Roach called him in to write and direct some of the earliest episodes. McNamara did his snivelly kids for comic books at least up to the war.-----Cole Johnson.

Hi Cole -
I agree that McNamara was an utterly awfully cartooner, but if you can get past that -- not easy, granted -- his strip (Us Boys) really had its moments. After ignoring it for years and years I forced myself to read a few months and was so impressed I ended up running a month of it on the blog. Go check it out and see if your opinion on McNamara doesn't mellow at least a little bit.

I never trust newspaper polls. They're inherently flawed, for the simple reason that not everyone answers them. The results reflect only those who take the time to write in to their papers, while there could be a huge core of fans who can't be bothered. The lesson? You snooze, you lose. But it's not inconceivable, as a result of human nature, that five hundred fans could lose a favorite strip because twenty five readers answered a poll, and, out of that number, sixteen didn't like it. do I have a better way? No, but it's worth asking if the system really works.