Following is our very first guest reviewer on the Stripper's Guide blog. Since I would rather have bamboo shoots shoved under my fingernails than read Dondi I'm not a good candidate to review this new book. The saccharine sweetness, Dondi's third-person references to himself, his constant "goshes" all make my skin crawl. That doesn't mean it's a bad strip, though. Just not my cup of tea. I do, however, have handy a Dondi fan in the person of my lovely, talented and otherwise discriminating wife. So take it away Judy ... 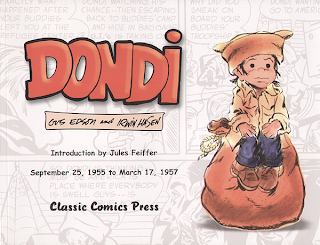 The Dondi comic strip, created by Gus Edson and Irwin Hasen, was about the adventures of a war orphan from Europe. He is befriended by two American G.I.’s and comes to live with them here in the States. The Dondi reprint book by Classic Comics Press reprints the first 19 months of the strip, from it’s inception on September 25, 1955 until March 17, 1957. The book’s format (11" x 8.5") allows for 3 dailies or one Sunday per page, which is a perfectly acceptable presentation — the strips are readable while the book is manageable. There is a delightful introduction by Jules Feiffer about Irwin Hasen and an extensive interview of Hasen by Bill Baker. The reproduction is superb — only one or two strips have a few minor dropouts — noticeable more by contrast with the excellent reproduction of all the other strips than by any glaring fault of the few affected strips.The Sundays are reproduced in crisp black and white.

As a child I was a fan of the Dondi strip but only had access to the Sundays, reading them in the Pittsburgh Press in the late 60’s and early 70’s. So it was with great anticipation that I began reading these early strips; my memory of details had faded and the Sundays simply could not tell the whole story. I mostly remembered the sweet innocence of Dondi and the obnoxious Mother McGowan. The strip’s storyline begins with two American G.I.’s—Corporal Ted Wills and PFC Whitey McGowan—returning from Europe and reminiscing about the war orphan — Dondi — they had befriended and taken in. But when the Army says it’s time to move you move, so, missing the lad, they are headed back to the states in a far darker mood than you should be after two years away. But Dondi, showing the ingenuity that will serve him well throughout the strip, has stowed away on the troop transport and is reunited with his ‘buddies’.

The strip continues to tell the tale as the state must decide Dondi’s immigration status and whether or not Whitey will be allowed to adopt him. We learn that Whitey is a bit of a millionaire playboy, but has a good heart in contrast to his over-bearing mother who is far more concerned about her position in society than the well-being of her only child. Because of Whitey’s money, Ted reluctantly agrees that Dondi will be better off living with the McGowans in New York than going with Ted to small town America where he lives with his mother and drives a delivery truck. But not to worry — Ted’s not written out of the strip — not by a long shot!

Gus Edson does a masterful job of keeping the strip moving while managing to fill in the back-story so new readers won’t be lost. In these first 19 months we have marriage and death, poverty and privilege, prejudice and tolerance, all handled intelligently but not belabored. While the strip would seem to be an innocent diversion about an orphan, Edson and Hasen used it from the start as a commentary on whatever struck them as important. In the Baker interview we learn that later, after Edson had died and Hasen took over the writing, the strip would tackle such topics as toxic waste and child abuse. Even in the early strips the reader is confronted with some unpleasant aspects of society, such as entrenched attitudes about immigrants and the state of public education.

Anyone who was even a passing fan of this 31-year strip should enjoy reading (or re-reading) these early strips — I certainly have!

Comments:
I am enjoying reading the Dondi book,and agree 100% with your review,having never read it in papers it's a fun find...but the really IMPORTANT thing is
Classic Comics Press published it, and that fans of classic comics have a chance to enjoy it. There are so many great strips that deserve a book!

Dan
PS Great review! I hope we get to read more reviews from you, Mrs. Holtz!

>The Sundays are reproduced in crisp black and white.<

What does that mean? Are the colour Sundays reproduced in halftone or is the original black and white linework (sans colour) printed?

Hi George -
The Sundays all appear to be reproduced from b&w proofs, not halftones of printed strips.

I was a big fan of Dondi as a kid as well: it had the entire back page of the Sunday NY Daily News comics for many years. Judy, thanks so much for your review and Allan as well for his candor. I'll admit that it's probably nostalgia more than anything driving my love for the strip so I can understand your stand here.

Not to sound like a jerk but Dondi is not from Eastern Europe, he is Italian.He's wandering around looking for his parents and saying: "Donde?" (where?) and that's what the soldier, not knowing any italian, names the boy.

Always happy to get corrections, Anon!

I was a Dondi reader from when I was seven to when Dondi left our local newspaper.Luckily the first story I read was when Dondi took a trip to Europe and revisited the place where he had first met Ted Wills many(three?)years before.It was revealed that Dondi's mother was an Italian girl who died in childbirth and his father was an American GI killed in action.

I have a friend whose elderly mother faithfully clipped and saved every Dondi episode for years and then when she found out it was to end she stopped and didn't save the last 2 or 3 weeks.
She has scrapbooks full of them. Amazing huh. Esther

Sara Duke (who grew up reading Dondi too)