Obscurity of the Day: Men, Women and Dogs 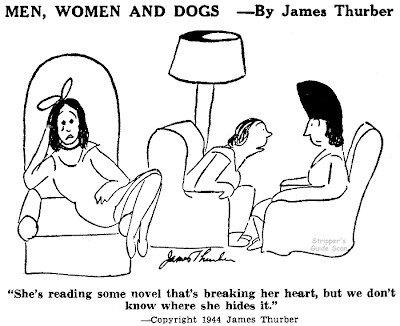 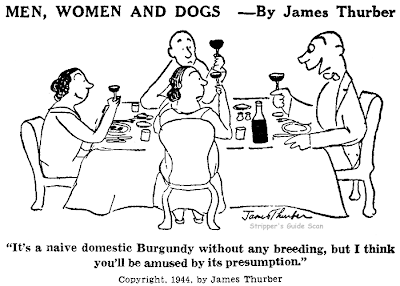 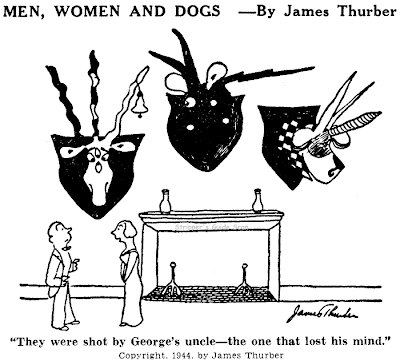 I sometimes buy old scrapbooks of clipped cartoons on eBay -- they tend to go cheap and sometimes I find a jewel among the cartoons some kid or grandma clipped in the old days. Paging through my latest acquisition of this type I found something in amongst the hundreds of Off The Record cartoons (this clipper REALLY liked Ed Reed's feature) something that almost made me kack up a hairball.

James Thurber, one of the greatest American humorists of the twentieth century, was also an amateur cartoonist. His cartooning abilities were so primitive that it never occurred to him that they were worth publishing. However, his friend and collaborator E.B. White was so tickled by his doodles that he secretly submitted them to Harold Ross at the New Yorker. Ross, too, was taken by them and published a few in the magazine. Readers expressed their delight with the off-kilter captions which seemed to suit perfectly the naive cartooning and Thurber had thrust upon him a secondary career as a cartoonist.

By the 1940s Thurber was all but blind, but continued occasionally to produce his cartoons, now drawing them on huge sheets with his bedimmed eyes hovering just inches from the paper.

After the initial amazement of finding the above cartoons in the scrapbook, being a Thurber fan familiar with his history I realized that there was definitely no way that Thurber was producing a daily newspaper cartoon in 1944. All became clear once I did a little checking and found that Thurber's book of cartoons titled Men, Women and Dogs, was published in 1943. Apparently the book publisher devised the scheme of offering newspapers a very short-running daily sampling of Thurber's work to promote the new book. In amongst the hundred of cartoons in the scrapbook there were only five of the Thurber cartoons, so the feature may have run for as little as a single week. What's odd is that this is the first time I've encountered the series -- apparently the promotion (I'm assuming the publisher gave the series away free) didn't succeed very well because very few newspapers printed them.