Obscurity of the Day: Of All Things 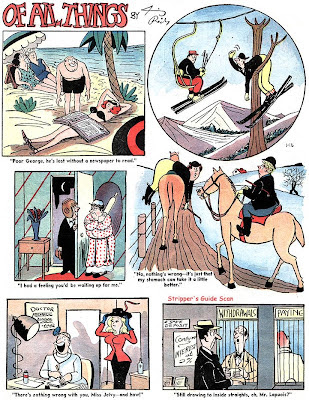 The Sunday version of Grin and Bear It, which I think is the first successful syndicated color page featuring an undesigned grouping of unrelated gag cartoons, might not seem like the likely progenitor of a whole genre. Such features, though, did have something going for them that made them very attractive to newspaper editors. These pages could easily be chopped down to any size or oddball format needed to share page space with an ad, even an oddly configured one. All the editor had to do was drop, resize or rearrange any of the cartoons and voila, a feature configured to wrap around any hair tonic or cigarette ad that needed a home.

Many features copied the Grin and Bear It formula, including this rarely seen one titled Of All Things. The feature was penned by Irving Roir, a successful magazine gag cartoonist and one of the famed Roth brothers, all four of whom were cartoonists of note. It was syndicated by the Chicago Tribune-New York News Syndicate which seems to have only used it themselves in the New York Daily News section, and then not often. According to the Editor & Publisher annual syndicate directories it was offered from 1954 to 1956. The example above, from 1955, is the only one I've been able to find.

Comments:
Love it! I have seen more shortlived and obscure gag collections like these, but this one works really well.