Obscurity of the Day: Omar Jr. 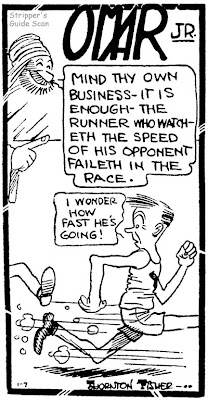 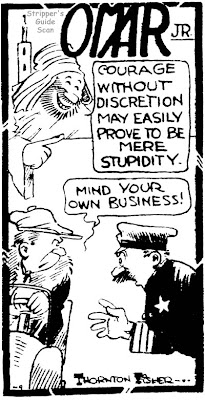 Sidney's Smith's Ching Chow panel did gangbuster business after being introduced in January 1927, so here's one of the inevitable me-too features. Thornton Fisher, a fellow whose many obscure features make him a regular guest on our Obscurity of the Day, contributed this one. Switching from an Asian sage to a Middle Eastern savant, Fisher's Omar Jr. jiggled the Ching Chow formula a little by illustrating the wise man's sayings rather than just depicting the title character over and over like in Smith's feature.

Omar Jr. was created sometime in 1927 and lasted until at least January 1928. It was syndicated by the Philadelphia Ledger who ran it in their unsuccessful tabloid venture, the Philadelphia Sun. I've never seen it appearing anywhere else.

A tip of the turban to Cole Johnson who supplied all the info on this feature.

Comments:
THANK YOU! I came across a random Omar Jr. Cartoon in my research and had no idea how to find the creator. (The copy I had of the one cartoon blurred the already difficult to read name). Thanks again!