Obscurity of the Day: Uncle Jim and Tad and Tim 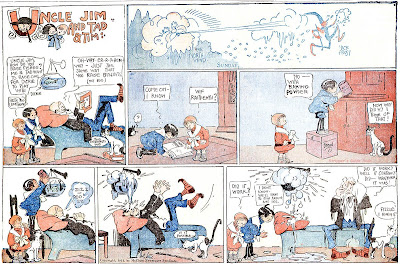 Clare Victor Dwiggins, or 'Dwig' as he was commonly known, had a very long and distinguished career as a cartoonist. He was a New York World headliner in the oughts but then in 1912 for reasons unknown he moved over to the McClure syndicate. McClure was on very shaky ground in these years; their preprint Sunday comic sections which had been very popular were beginning to lose clients at a fast clip. Dwig was probably wooed away from Pulitzer with the thinking that he might help them to hold on to their diminishing client list.

Dwig created a page that featured today's obscurity, Uncle Jim and Tad and Tim, as a half page strip along with Mrs. Bump's Boarding House. The page debuted on January 12 1913. Apparently the presence of Dwig was not the draw that could save the McClure section because in the 1913-14 period the client list for the McClure section continued to dwindle.

My guess is that McClure might have been their own worst enemy in this period. It's pretty common to find papers switching to the McClure section only to switch again to another syndicate within a few weeks or months. Perhaps McClure's distribution system was unreliable, perhaps they couldn't compete with the pricing from other syndicates. Whatever it was, they seemed to be letting major paper clients slip through their fingers.

Uncle Jim and Tad and Tim is a deliciously pleasant trifle -- Jim and his two young nephews are like the Katzies on Prozac. The kids get into some minor mischief, or Jim plays a trick on the kids, but the action is so low key and the bonhomie of the characters so heartfelt that the overall impression is that the players just got together on a languorous Sunday afternoon to entertain us with some little tableau that they all cooked up together.

By 1914 Uncle Jim and Tad and Tim is appearing in so few papers and so irregularly and sporadically that it is all but impossible to tell when the last strip was offered. My best guess is an end date of September 13 1914 (found in the Atlanta Constitution). But they could have been running it late ... anyone have some corroborating data to share?

Comments:
Hi. Hoping you can help me. In the 1950's , there was in the Sunday comics, a set of drawings of various characters with descriptions underneath the drawing which were in circles or boxes. They were mostly shoulders up black and white faces of people you might see around-really detailed and interesting characters. It was in the Star Ledger or one of those papers my Dad used to get. I have tried to find anyone who remembers them as I would love to know who drew them and the name of the "strip". Wish I could describe them better but I was very young at the time. Please help if you can. Thanks. Pat

Sounds to me like you may be looking for "Among Us Mortals" by W.E. Hill.