Obscurity of the Day: Danny Hale 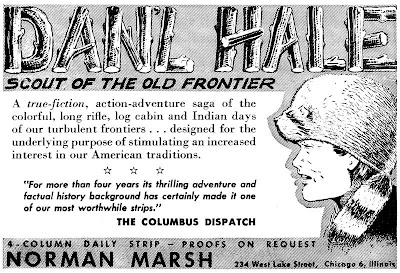 After Norman Marsh's modest success with the Dick Tracy clone Dan Dunn comic strip, a stint in the Marines, and a short run on the detective strip Hunter Keene, he finally found the niche that suited him with Danny Hale.

After World War II William Randolph Hearst became increasingly interested in features about American history and Danny Hale was one of a group of offerings in this vein that started in the late 40s. Danny was a kid frontiersman who found himself tagging along with revolutionary war heroes, accompanying the Lewis and Clark expedition, and generally being in the right place at the right time (even if those times were widely separated) to be a first person observer of history. Marsh had a light touch with the educational aspect of the strip, though, and Danny Hale can be comfortably categorized as a rollicking adventure yarn, much more palatable to kid readers who can smell an educational strip from a mile off.

Norman Marsh's artwork was never his strong point, but you have to give him points for never giving up. His Danny Hale strips often feature dramatically designed if not all that impressively executed crowd scenes, vistas and action panels.

King Features introduced Danny Hale to a relatively indifferent audience of newspaper editors on October 27 1947. After a little over three years the strip still didn't seem to be catching on and King was ready to pull the plug, but Marsh decided he could go it alone and started self-syndicating the feature, apparently with King's blessing, starting with the January 15 1951 episode. Marsh took it upon himself to aggressively market the strip through personal appearances, devoting almost as much time to selling the strip as he did to producing it. Hard work paid off and Danny Hale managed to no only keep many of its clients from the King days but also to add more. He proved particularly adept at signing up smaller papers.

A year after the switch to self-syndication Marsh changed the strip title to Dan'l Hale and aged his hero a bit into a young man. His adventures continued in the same vein, mixing light dollops of history with lots of good adventuring for over ten years, finally coming to an end on October 13 1962, a very impressive run for any strip, much less an awkwardly drawn self-syndicated one.

A 1951 news story about Norman Marsh's marketing campaign can be found here.

Comments:
I seem to remember Danny Hale having a wife. Am I mistaken?

Hi Richard --
Could very well be that Danny got hitched later in the run, I haven't read a whole lot of the strip.

Occasionally think about childhood cartoons Danny Hale spring forward. But seemingly the strips were obscured. Until now! I read about Danny in a comics magazine named Kong Kylie (The Little King) in the late forties in Copenhagen, Denmark.