Obscurity of the Day: Dick Clark's Rock, Roll and Remember 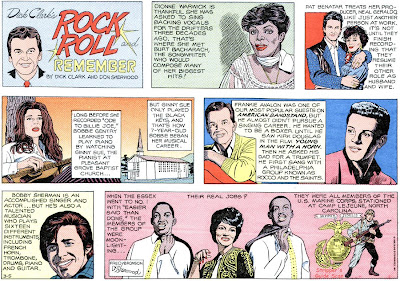 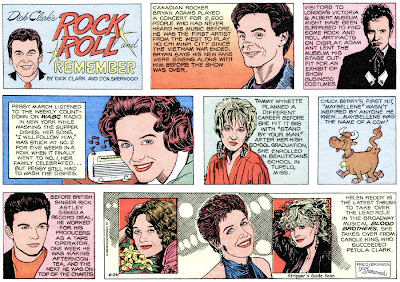 Dick Clark's media empire decided to try extending itself to the Sunday comics with Dick Clark's Rock, Roll and Remember. The strip, which was actually a sequence of unrelated individual panels, traded in trivia and factoids about rock-n-rollers of the 50s-70s. The title was cribbed from Clark's biography and syndicated radio show of the same name.

The feature might have done well if it had been available about a decade and a half earlier in the midst of the 50s nostalgia boom, but the strip's debut on September 25 1994 was met with anything but a rousing round of applause from newspaper editors, even the fogiest of whom knew darn well that this craze had been tapped out.

The feature was crafted by good hands. It was written by Fred Bronson, the Chart Beat columnist for Billboard magazine who has an encyclopedic knowledge of rock music history. It was drawn by Don Sherwood, whose lovely clear line style has, unfortunately, graced an awful lot of short-run stinker strips over the years. This one wouldn't change his luck.

The strip was credited to Olive Enterprises, a Dick Clark company that handled his endorsements, but was actually distributed by the Chicago Sun-Times, which had otherwise gotten out of the strip distribution business in 1984 when Field Enterprises was sold off to the Darth Vader of newspapers, Rupert Murdoch. The strip lasted well into 1995 but I haven't found a definitive end date, and the 1995 E&P directory claims there was also a daily version which I have yet to locate.

Comments:
Wasn't there a strip called Rock Channel, in the 80S that was sort of a WKRP meets MTV type sitcom with cartoon versions of rock stars as guests?

Yup, we'll cover that strip one of these days.