Obscurity of the Day: The Ambassador 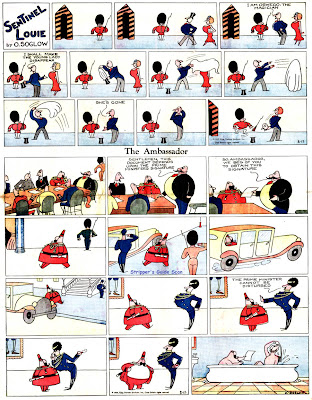 Masterful cartoonist Otto Soglow first made a name for himself with his Little King cartoons done for the New Yorker magazine. That cartoon series began in 1930 and its popularity soon came to the attention of William Randolph Hearst. As usual, what Hearst wants Hearst gets, and Soglow signed a contract with King Features in 1933. Hearst wanted Soglow to continue his Little King series as a Sunday strip for King, but the character was under a contract with the New Yorker until 1934. In the meantime Soglow was directed to create a knockoff of his own character, and that was The Ambassador.

The Ambassador began on May 28 1933 as a series of Hearst Sunday magazine covers, then switched to a regular Sunday comic strip in the Puck section. As you can see above, there is little but the absence of a crown to distinguish the two features. The Ambassador completed his mission as pretender to the throne on September 2 1934, and the following week was replaced by The Little King, which would run until 1975.

The Comics Journal did a reprint series of this strip in issue #286. You can view an excerpt of the accompanying article here on the Journal's site.

Comments:
THE AMBASSADOR page was in the Puck sunday comic pages starting 11/26/33.