Obscurity of the Day: Crazy Charlie 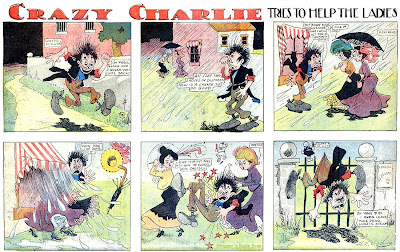 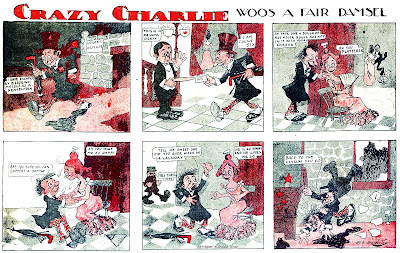 H.E. Godwin's cartoons were a staple in Philadelphia in the oughts, but the vast majority of his work was in the form of one-shots, gag cartoons and spot illustrations. It was only in the period 1902-04 that he contributed Sunday series to the Philadelphia Inquirer. Of the half-dozen series he created, most lasted only a few months, and Crazy Charlie was no exception -- it ran from August 9 to December 13 1903.

I cannot hope to describe this series better than Cole Johnson did when he sent me the scans of this rarity -- he termed it "a sensitive, gentle treatment of the mentally challenged." He also pointed out that the plot is practically a dead ringer for Milt Gross' much later Count Screwloose.

A tip of my Napoleon bicorn to Cole for these samples.

Comments:
Milt Gross should sue Mr. Goldberg for such a blatant steal of his character, Count Screwloose from Toulouse.

Oops. This is why I shouldn't write posts at 8 in the morning. Tomorrow, Alex Raymond's classic Little Nemo!

We are working on a post about H.E. Godwin's cartoons at an Ohio library. When we do run it, is it okay if we include a link to your post of Crazy Charlie cartoons? Thanks!