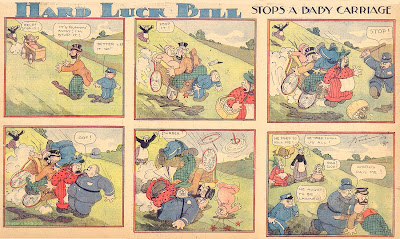 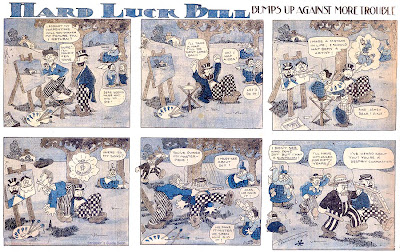 Harold Knerr had a habit of copying successful strips. It was his long-running Katzies-clone The Fineheimer Twins strip that served as his portfolio when it came time to replace Rudolph Dirks on The Katzenjammer Kids, and here he is in 1903 at the Philadelphia Inquirer doing a bald-faced copy of Happy Hooligan called Hard Luck Bill.

Hard Luck Bill started out as Hard Luck Willie on February 22 1903 but the title was changed to its final form on April 26 1903. For unknown reasons Knerr didn't sign the strip until June 14 of that year. The strip ran until January 3 1904.

The examples above originally ran in the Inquirer on October 4 and 25 1903. Of special note here is the second example which features a crossover appearance with The Fineheimer Twins. Hail, hail, the clones are all here!

A tip of the tomato can topper to Cole Johnson who supplied the scans of these samples. Thanks Cole!