Obscurity of the Day: Professor Hypnotiser 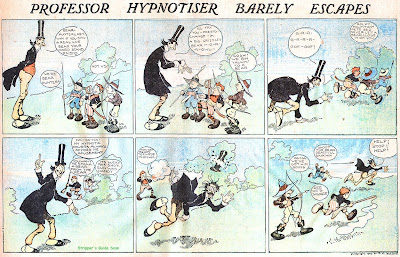 Move over, Mandrake! Way back at the turn of the century Ed Carey played the hypnosis schtick for laughs in Professor Hypnotiser. Although the professor was eminently successful at clouding men's minds he'd invariably get hoist by his own petard as in this sample.

Ed Carey had a long career and was a top-notch cartoonist and gag man. After getting his comic-stripping feet wet at the Chicago Daily News he soon moved on to the bright lights of New York City where he did much of his work for McClure, as is the case with Professor Hypnotiser which ran sporadically between February 1 1903 and July 23 1905. Carey often didn't bothered to sign his strips, but his delightfully playful style is impossible to mistake.