Obscurity of the Day: Van Boring 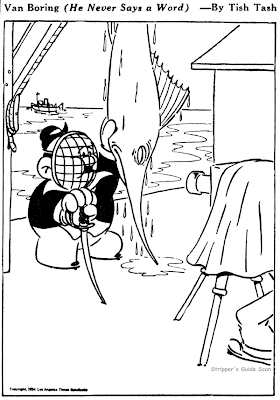 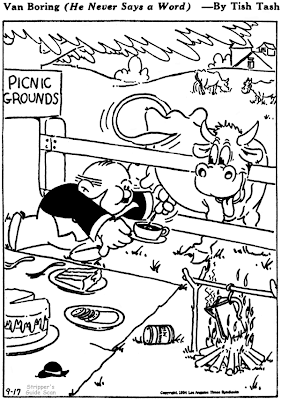 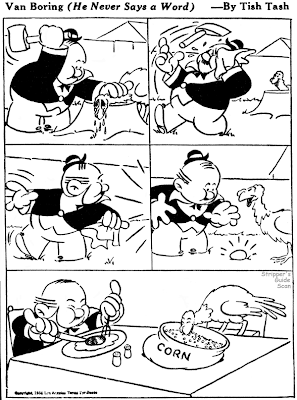 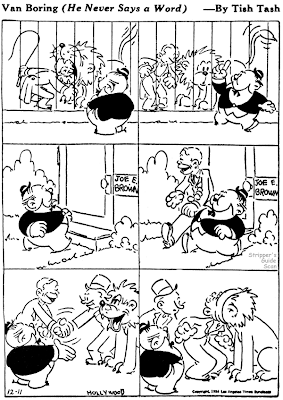 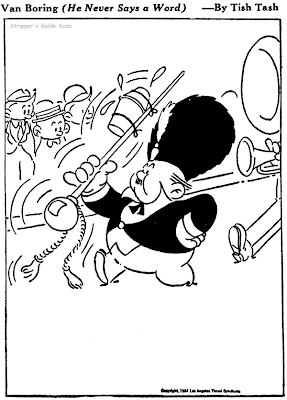 Van Boring was a very Tinseltown kind of strip. It was distributed by the LA Times Syndicate as one of their very few cartoon offerings in the 1930s, it featured a main character who was a simulacrum for Oliver Hardy, and the feature was penned by Frank Tashlin, an animator and later screenwriter.

Van Boring, a pantomine panel, ran from January 6 1934 until sometime in 1938 (sorry, I haven't figured out a definite end date yet). Tashlin used the pseudonym 'Tish Tash' to sign the strip, apparently because he was moonlighting to produce the strip while he was working at the Warner Borthers animation studio. According to Wiki the main character of the feature, though having a pronounced resemblance to Oliver Hardy, was actually modelled after Tashlin's former animation boss, Amadee Van Beuren.

Like most pantomime features, Van Boring's gags were hit and miss; any cartoonist will tell you that sustaining the gags in a daily pantomime feature is a very tough row to hoe. The art, on the other hand, was a consistent delight.

The strip did not sell at all well, especially after the phenomenal debut of Henry as a newspaper strip at the end of 1934. Few papers wanted two pantomime features, and Henry had a built-in audience from his appearances in the Saturday Evening Post. The strip was also hobbled by being distributed by the then minor LA Times Syndicate, an outfit that had only this one cartoon feature available at the time.

Comments:
Funny you post this. I was thinking of Tashlin's foray into comics the other day.

Tashlin was credited in some WB cartoons as "Tish Tash" as well.

Hello, Allan---Looks like the last VAN BORING appeared in the LA TIMES on 6-19-36. Did it continue elsewhere? I think i've only seen this one in one other paper, the HONOLULU ADVERTISER.--------Cole Johnson.

Hi Allan,
I have a run of Van Borings copied from Frank Tashlin's files. The earliest one is 1/16/1934 and the last one is 6/20/1936. Are you pretty certain about the start date? Thanks, Mark Kausler

Oh my. We do have some date issues here don't we. The 1/6/34 date I cited was from the New Orleans Times-Picayune, but that date is a Saturday so I must have written it down wrong. Mark's 1/16 date is no better -- that's a Tuesday.

Worse problems with the end of the feature. The 1938 end year I cited is based on the E&P listings (I too have never seen any past 1936). But a closer look at those listings reveals problems. The 1934 listing is for LA Times. So far so good. But the 1935 listing is for Consolidated News Features, and I know that's bogus cuz I've got samples from 35 and 36 that still have the LA Times stamp on them (unless CN was an alternate distributor -- not unheard of). Then in 1936-38 the syndicate is listed as Dominion News Bureau, which handled Canadian distribution of strips (mostly Hearst material). Did Dominion sell the material in reprints to the Canadian market and the feature did end in 1936, or are the listings completely bogus. I dunno!

I am writing a book-length study of Tashlin's work (on which Mark K. helped me several years ago - hi, Mark!), and I have used the following resource from the San Francisco Academy of Comic Art, as a fairly reliable reference (link goes directly to a PDF download): SFACA Finding Aid.

Maybe this will help?

I just created an article for Leon Schlesinger's animated feature called "Little Beau Porky" on Wikipedia at http://en.wikipedia.org/wiki/Little_Beau_Porky, which lists Frank Tashlin (as Frank Tash) as the director. Check it out.

I actually googled this thread after seeing a 1948 Maxwell House ad in Life that had an accompanying illo signed in Tashlin's full name. There is no mention of any commercial cartooning background in his bio beyond his animation work. Anyone know if he did any more commercial art?