Obscurity of the Day: Hubert 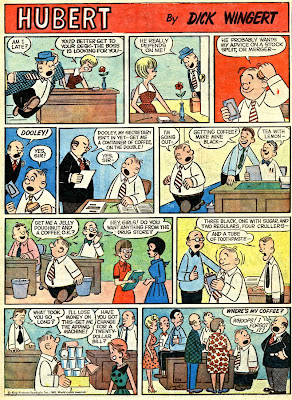 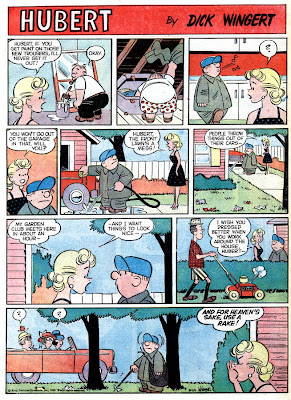 You wouldn't think that any feature that ran for fifty years could be classified as an obscurity, but I think Dick Wingert's Hubert may honestly fit the category.

Hubert first came to life in Stars & Stripes during World War II. He was the eternally confused little dope who doggedly tried to do his duty but constantly ran into trouble. It's said that Wingert's creation was almost as popular as Mauldin's Willie and Joe with the GI audience.

After the war Wingert brought Hubert back home in a syndicated panel offered by King Features starting December 3 1945. Hubert made a painless transition from foxhole to suburbia with his dishy wife Trudy, and started out strong enough in sales that a Sunday page was added February 3 1946.

No one expected the panel to last long. Many wartime features tried to adapt themselves to a post-war world and lasted only as long as the nostalgia of returned GIs held out. Seldom did that sentimentality last beyond a decade. Although Hubert lasted much longer, I think his welcome was generally worn out by the end of the 1950s as it's rare to find the feature after that. However, King Features continued to make the feature available to an increasingly tiny number of newspapers for decades more. King is notable for keeping features well beyond their profitable life, whether through inertia or affection for their veteran creators.

Even in the 50s the humor in Hubert was, to put it politely, low-key. The Sundays especially, as you'll see in the samples above, barely even had gags. The panels and strips often seem to set up for a punchline that never really arrives, sort of a do-it-yourself feature where the reader does the heavy lifting. Wingert desperately needed a gag-writer, and if he did have one any pay they were getting was an overpayment. The only assistance that Wingert is known to have had was Tex Blaisdell, who says he assisted on the art in the 50s.

By the 1960s Wingert's artwork was degrading, and by the 80s and 90s there's just no nice way to describe the truly awful clumsiness of it. King Features finally put the feature out to pasture on January 16 1994.

Comments:
All this goes to show what a truly modern strip Hi and Lois was. I hopw to be showing more of that on my blog this year, but I have relatively few sundays from the first years. Love the ones I have from 1959, though, when it was stil a work and family strip instead of the family strip it became later.

It is also a current obscurity.
The King Features Weekly Service brought back the panel as a part of its weekly package.
http://www.kingfeatures.com/features/wklysvc/KFWS_Comics.pdf
I don't know when they started offering it as part of the Weekly Service, only that by 2003 it was in the package and it still is.

From what I can find, Dick Wingert died in November 1993. This suggests that King Features terminated the strip not because it was losing papers or had dropped in quality, but because the cartoonist had died and his backlog of strips had run out.

You're not kidding about the artwork. Here's an example from 1987 (from NCS' website)

Thanks Anon, I suspected that Wingert didn't give up the feature until he died but couldn't find an obit for him. And DD, thanks for the link -- I haven't seen anyone that uses the weekly package actually print any of these moldy oldies (Hubert, Breger and Laff-a-Day). Have you?

I have. There's a free weekly 'paper' of sorts called Tidbits of Madison County and they run "Hubert" and "Laff-a-Day," along with their up-to-date comics.

Hi Charles -
Thanks for the info! Guess they draw the line at Breger, eh? I'll add notes to my database that Hubert and Laff-a-Day are definitely being recycled.

From Google News Archive, I found two articles about Wingert's death. Both are for pay with only a small portion visible free:

"The Sundays especially, as you'll see in the samples above, barely even had gags. "

well, they both made ME laugh.

You know who runs Mr. Breger? The Onion, on its second-to-last page. Other strips from the King Features package they use are Laff-A-Day and The Spats.

They also run the Spanish-language version of Ziggy.

Hi Anon -
Wow. I've never seen the print edition of the Onion, but I assume that line-up is purely intended as a mocking of mainstream newspaper comics page humor? As such that's an inspired lineup.

The Onion's selections are a very mixed bag. Besides the King Features selections and Ziggy in Spanish, other cartoons they run are Red Meat by Max Cannon, Wondermark by David Malki, and Postage Stamp Funnies by Shannon Wheeler. So some of the comics they run were selected ironically, but others nonironically.

While trying to find a paper that runs one or more of the new JW Syndicate panels
http://jwsyndicate.com/cartoon_features.htm
I found a paper that ran the hat trick of Hubert/Mr. Breger/Laff-A-Day.
Go to http://www.smalltownpapers.com/index.htm
and find the Dickey County Leader.
Page 4 of the November 6, 2008 edition.
Of the score or so papers there that carry comics, they are overwhelmingly the KFS Weekly package.
Though I was surprised to find Reid's "Cow Pokes" still running. Any idea when the last new "Cow Pokes" ran?
Never did find a JW offering.

Dick Wingert passed away in a hospital in Bloomington, Indiana, shortly before the end of the strip. He had been living in nearby Nashville, Indiana, known for its artists' colony, for some time. I don't have the date of his death handy. I agree--Wingert's later art is almost painful to look at. It's hard to believe it remained in syndication, but then there's a lot of bad art in syndication even today.

Just an update: Richard Thomas "Dick" Wingert passed away on Nov. 21, 1993, in Bloomington, Indiana. He was born on January 15, 1919, in Cedar Rapids, Iowa, so Hubert would have ended 75 years and one day after his birth.

Hubert by Dick Wingert. I found a copy that was circulated this Spring--it had a little girl crying & Hubert says to Abby: "Just because I won't let her hit me on the head with a hammer doesn't mean I don't love her." Do Hubert & Abby have children ?--I have not seen one 'till this sample. June 2011.

Hubert had a daughter named Elli. Also in the cast: his mother-in-law; his boss, Dexter L. Baxter; Charlie the milkman; a sheepdog named Freddy; and the office secretary, Miss Prim.

Hi, my grandfather was good friends with Dick Wingert and acted as a gag writer for him, contributing to Hubert throughout much of its run. What you said about his joke-writing may be somewhat harsh, but perhaps rather true. Thankfully, his work with Bill Hoest on the Lockhorns and Mort Walker on Hi & Lois seems to be a lot better.