Obscurity of the Day: Bonehead Barry 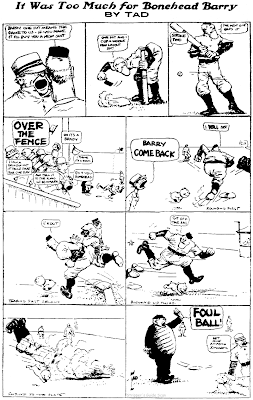 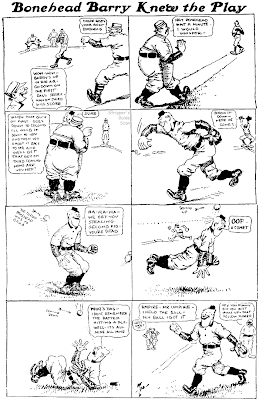 One of the very first strips about a baseball player, Bonehead Barry was an occasional feature by Thomas "TAD" Dorgan that he penned in lieu of his daily sports editorial and other topical humor cartoons. Filled with his trademark street lingo and an intimate knowledge of baseball strategy, the strip was a delight for fans of the game. The painfully dumb but physically talented Barry was the character template on which most later baseball strips would build, including You Know Me Al, Cotton Woods, Ozark Ike and Soapy Waters.

The running dates on this strip (May 13 1909 - March 12 1910) are not at all firm because they are based on appearances in the LA Examiner, not TAD's home paper in New York, the Evening Journal. I didn't do the indexing of the New York Hearst papers from this era, the very able Dave Strickler already having completed that task. Strickler's index doesn't include Bonehead Barry so either it didn't appear there or Dave didn't recognize its occasional appearances as a series -- pretty reasonable since it would have appeared on the sports page, not with the Journal's other comics. Tad was one of those cartoonists who threw an awful lot of spaghetti on the wall to see what would stick and in such situations it's very tough to do a proper indexing job when working with limited time and a lot of material to get through.

Comments:
"was a delight for fans of the game.,."

And is now to me.thank you for posting it, with no one from the time to read it, so that it can seen by new rewaders Dorgan was one of the certainly earlier cartoonist to really humanize dogs in his other strips..like Judge Rummy...Hot dog!!