Obscurity of the Day: Nature Notes 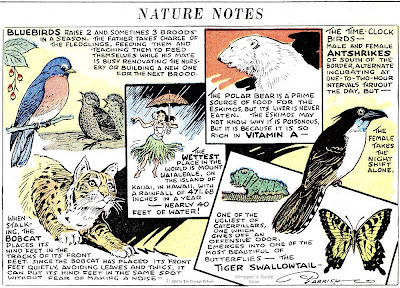 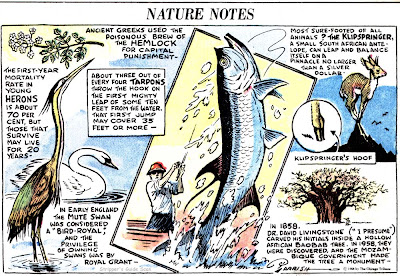 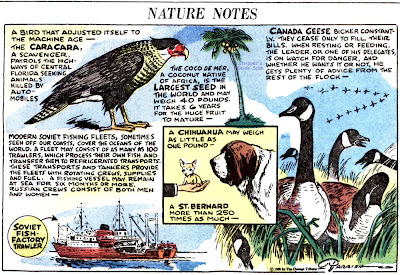 Joseph Parrish's career began in Tennessee where he worked as editorial cartoonist for the Nashville Banner and then the Tennessean. In 1936 he was called up to the majors when he was offered a job at the Chicago Tribune. Parrish would provide conservative, somewould say reactionary political cartoons to that paper until the early 70s. One of the few cartoonists to proudly support Senator McCarthy's commie witchhunts of the 50s, his work in those years was popular with the political far right.

Parrish often had a place of honor on the front page of the Trib, where editorial cartoons were run in color -- one of the few papers ever to do that on a regular basis. On Mondays, though, Parrish eschewed politics and produced a panel called Nature Notes, a feature that offered factoids about the natural world. The Nature Notes panel debuted in January 1964.

Parrish retired from editorial cartooning in 1970 or '72 (sources disagree) but he continued to produce his weekly Nature Notes panel until August 22 1982. In the 70s the panel was moved from the Monday front page to the Sunday comics section.