Obscurity of the Day: The Adventures of Percy and Willie 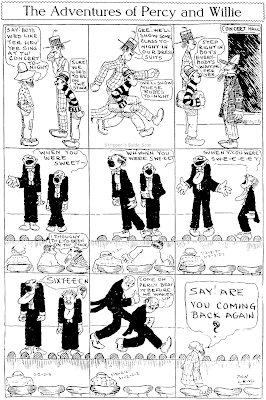 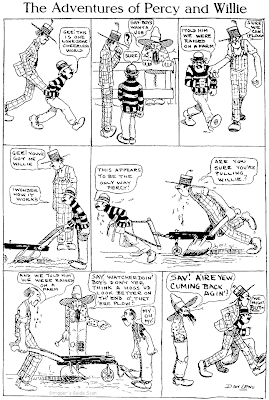 The Adventures of Percy and Willie was a weak offering that ran in the Los Angeles Examiner on a handful of dates from July 29 to August 16 1909. Our heroes were a pair of ne'er-do-wells from L.A. who sojourn out to the back country looking for work.

The strip was signed by Dan Leno, who like Herriman at the same paper, was a jack of all cartooning trades producing editorials, spots and sports cartoons. Leno didn't have nearly the skill of Herriman, though, and his tenure at the Examiner seems to have been limited to the spring and summer of 1909.

Although it's perfectly possible that Dan Leno was the cartoonist's real name, I wonder if it was a pseudonym. There was a highly regarding British comedian by that same name, famous enough to have a comic weekly named in his honor on that side of the pond. He'd died a few years earlier, so perhaps a young British transplant might have taken his name as a good-luck pseudonym when entering the entertainment ranks.