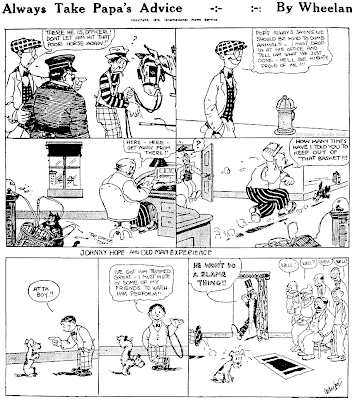 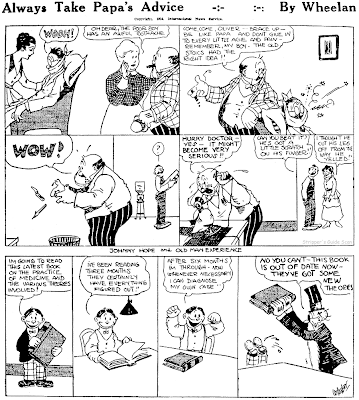 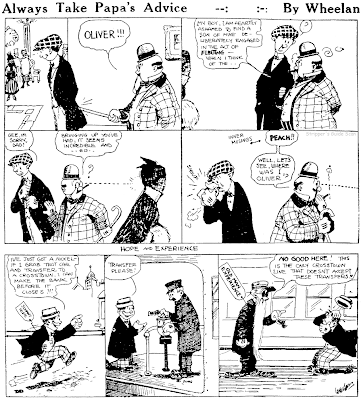 Ed Wheelan became a featured player on the New York American's comics page in late 1915, penning a wide variety of comic strips through mid-1916 when he was temporarily pulled off that duty to supply sports cartoons. Here's one of his features (or actually two counting the 'daily topper' that was currently in vogue with Hearst). Always Take Papa's Advice had a rather frail little running gag, with papa giving the doting son some good advice and then proceeding to break it himself. Ho hum.

Microfilm for the New York American is in one heck of a mess throughout the second half of the 1910s so the best running dates I can offer for Always Take Papa's Advice are from the Pittsburgh Post which ran the American's line-up pretty faithfully, but in fits and starts and generally a little bit late. The running dates there are March 21 to June 18 1916.

Hope and Experience first appeared on December 10 1915 and ran sporadically as a 'topper' through 1916. In 1917 the strip graduated to featured status and ran until April 6 1918. Running dates for this feature from the New York American itself.

Comments:
Wow! What a treat! I can't thank you enough for putting things like this up! If print cartooning makes a comeback, which I passionately hope it will, then you'll have been one of the people responsible for it. Keep up the good work! 1

Hi Eddie -
Thanks for the kind words. How I'm helping to revive print cartooning by showing cartoons on the web I dunno, but I'm all for it if I am!

I wonder how many of our blog readers understand that the low-res versions of the cartoons I post here are mere shadows of their quality on the printed page. Granted plenty of the obscurities I show here are not the greatest examples of graphic artistry, but others I'm downright ashamed to show here because it does not serve the creators fairly. A recent example would be the Fred Richardson drawings from early December. Those really ought to be seen on paper to appreciate the masterful linework.