Obscurity of the Day: Hans 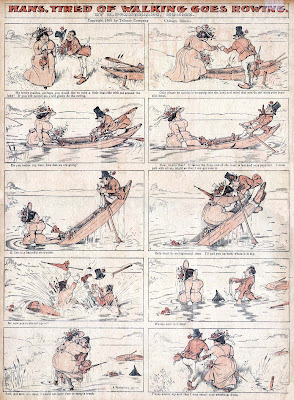 In 1906 the powers that be at the Chicago Tribune evidently noticed the popularity in American newspapers of reprinting cartoons from European publications. Many, many papers ran them regularly in the 1890s-1910s. The cartoons were clipped from British, French and German humor magazines, translated as necessary and run in place of homegrown material.

Thing is, apparently the Trib folks didn't quite understand the dynamics of the popularity. It wasn't because these imported cartoons were particularly funny -- generally they weren't, especially after translation. It wasn't that they were well drawn -- generally they weren't, especially after suffering the indignity of being replated as 2nd or 3rd generation fuzzy, blotchy versions of the originals. It wasn't that newspaper readers even had any great craving for them -- in those days if you really wanted to read European cartoons you could get the imported magazines from any well-stocked newsstand.

The popularity of these cartoons boiled down to one thing -- money. Newspapers loved them because there were no royalties to be paid. Material from foreign publications was regularly and systematically plundered in those days without any payment to the original publishers or creators. Now if you were a newspaper publisher looking at your bottom line, would you hire on a cartoonist or get the (sort of) equivalent material practically free for the pittance of replating some clippings from a magazine that cost you all of a quarter? Don't want to mess with translations and replating? No problem. There were suppliers who would do the dirty work for you and supply printing plates all ready to go for a negligible price -- the syndicates that supplied the material did it cheap because their outlay on the creative end was a big fat zilch.

It's my belief that the popularity of reprinted Euro cartoons led the Chicago Tribune people to make the erroneous assumption that the public had some intense craving for this material. In response they sought out a group of German magazine cartoonists to supply them with most of the contents of their Sunday funnies section starting in 1906.

As best I can tell all the cartoonists submitted their material direct from their native Germany, though I've seen a few declarations to the contrary. The Teutons generally preferred to do one-shot strips, but most did also produce a few continuing series. Of course the best-known are Lyonel Feininger's Kin-Der-Kids and Wee Willie Winkie's World. Today, though, we take a look at Hans, the only series done by Karl Pommerhanz. Pommerhanz, I read on Lambiek.net, was a longstanding regular at the humor magazine Fliegende Blätter. He occasionally was credited in the Trib as Kunstmaler ("Painter") Pommerhanz, and his home of Munich was always prominently mentioned.

The star of the strip was a bit of an enigma -- was he a tramp, a traveller, a gentleman, a thief, a ne'er-do-well? Tick off all the above because Pommerhanz seemed to have no concrete ideas on the subject. No matter, though, because the strips were pretty rudimentary offerings. The writing would have been more at home in an 1850s humor book, the art had a similarly antique feel. The story and pacing remind me of the proto-comics of Rudolphe Topffer more than the sort of offerings that looked at home in the pages of a 1900s American Sunday comics section.

Hans had a very short run, appearing from July 8 to August 19 1906 in the microfilm I reviewed. However, that comes with an asterisk because OSU in their Pommerhanz material have Hans strips they claim date as late as September 9. Two possible explanations occur to me -- first that their tearsheets came from another paper that printed the material late. This explanation is doubtful, though, because the Trib was singularly unsuccessful at syndicating their Sunday funnies at this time. Second, perhaps these Hans strips appeared on the reverse side of Feininger material which was all missing from the Tribune microfilm I reviewed (undoubtedly some miscreant had plundered the bound volumes for these valuable pages long before the microfilmers got to it). Only a trip to OSU to examine these pages will solve the mystery and I've added that little job to my vast 'to be researched' list.

The Tribune (or their readers) soon tired of the German Sunday funnies and all the Fritzes, Karlses and Hanses were gone by the end of 1907, the end of an interesting experiment in imported Sunday funnies.

Comments:
Hi Allan! Here's some help with your mystery: we have Hans pages that appeared in the Trib from June 17 through Dec 30, 1906.

Good night. I am stupid twice over. I did check in with your site when I was writing the post, since I know you cover Trib material well, but didn't find anything for Hans since I didn't search around for a link to 'Various Trib Germans'.

Okay, so you spoon-feed me where I need to go, and I'm looking over the Hans strips. I come upon the one I scanned for this post. Hmm .. obviously Thrillmer's screwed up because he lists that strip as being from 12/9/06 and I have nothing beyond my stated end date in the post. I go check my inventory, and sure enough, it is from 12/9/06. I really gotta stop writing these posts in the morning. Apparently two cups of coffee no longer is enough to kick my brain out of neutral.