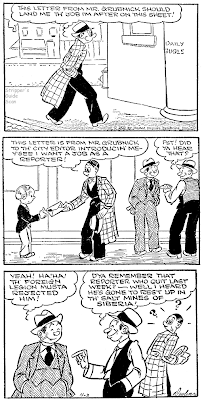 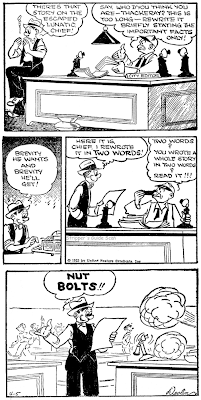 Nominally by the great Milt Gross, Looy Dot Dope owes much more to its ghost, Johnny Devlin, for whatever small success it had.

Looy was the hare-brained son in the Feitlebaum family, the mainstay characters in Gross' weekly illustrated short story Gross Exaggerations in the Dumbwaiter. This New York World column, which featured Gross' trademark impenetrable Noo Yawk dialect humor, started in the early 20s. At the same time Gross also did a series of daily strips. In late 1925, almost certainly at the end of October, Gross' current daily, Banana Oil, underwent a name change. In the Evening World the name was changed to Gross Exaggerations, then to The Feitlebaum Family on June 1 1926, then finally to Looy Dot Dope on 1/7/27. Other papers seems to have run it from the beginning as Looy Dot Dope.

I haven't seen the very earliest strips in this series with my own peepers (Jeffrey Lindenblatt got me the info on the early history of the strip from his indexing of the New York Evening World), but certainly by 1927 Johnny Devlin was ghosting the art. I assume that he also did the writing since there are no Yiddish-isms to be found in the strip. See the first strip above for an example of the strip by Devlin under Gross' byline.

In late summer 1930 Milt Gross was lured away from the World by Hearst. At this point Looy could have been put out to pasture, but instead the World decided to continue it, now giving Johnny Devlin credit on the strip. His byline started showing up in September of that year.

Until this time Looy (as the title was often shortened by newspapers) had confined itself mostly to gag-a-day activities, and pretty lame ones to boot. However, once Devlin got credit, or blame, as the creator, the strip started morphing. Humorous continuities began to be interspersed with runs of daily gags, and even serious adventures popped up from time to time. For instance, in the 1932 sequence shown above Looy starts out with gag-a-day strips about working as a reporter. Then a storyline evolved about reporter Looy getting some inside info on a group of gangsters. At first it was still gag-driven continuity then all of a sudden got very serious as Looy went into hiding to avoid being whacked. Eventually Looy brought the crooks to justice, and quick as a finger snap the strip reverted to gag-a-day.

When the New York World went belly-up Looy dodged another bullet when it was picked up by United Feature Syndicate (that syndicate took on all of the World's strips and instantly launched this very minor player into the big-time). United seemed to have better luck at selling the feature and the strip started appearing in far more papers than it had earlier on.

Looy must have been considered a success because sometime in 1933 or '34 a Sunday page was added (my earliest is in late '34 but I suspect it started well before that).

For reasons unknown Devlin walked away from his now modestly successful strip. His byline disappeared as of November 30 1935. After a four month period where the strip was unsigned, Bernard Dibble began taking credit for the feature. Dibble was the hardest working man in comics at the time -- as best I can tell, during this period he was also doing the daily version of The Captain and the Kids, the Sunday Cynical Susie, and the daily and Sunday Danny Dingle. How he managed it all I can't even begin to guess. One can only hope that the poor guy was getting a lot of uncredited help from the rest of the United Feature bullpen.

Dibble's version of Looy lacked whatever small measure of charm it had under Devlin and the strip petered out on July 8 1939. It had a brief curtain call in 1940 when World Color Printing offered reprints of mid-30s Sundays.

One additional note -- in the alphabet soup of titles under which the strip ran, I must also mention The Mis-Adventures of Louie, a title inexplicable used by some papers in the 1930s.

Phew -- that was exhausting!

Comments:
Hello, Allan---Wasn't the strip also known as "NIZE BABY" at some point, as well?---Cole Johnson.

Hi Cole -
Nize Baby was the Sunday running concurrently, but I tend to classify Gross' works separately since everything he did was only very loosely tied together. Besides, Gross actually did Nize Baby himself, whereas Looy Dot Dope pretty much just traded on his name.

This morning I just said louie dot dope and then looked up here where I got if from. I remeber saying it years ago.

I remember in my childhood, Winnie Winkle, Tillie the toiler, Dick Tracy,the katzenjammer kids etc. those were the good old days..

Since kidhood, I've been nicknamed "Lòóy". I used to read Milt Gross's column in NYDaily Mirror. For a while, MG even emitted "Knock Knock" cartoons. I've been a longtime fan of his books.