Obscurity of the Day: Nero Wolfe 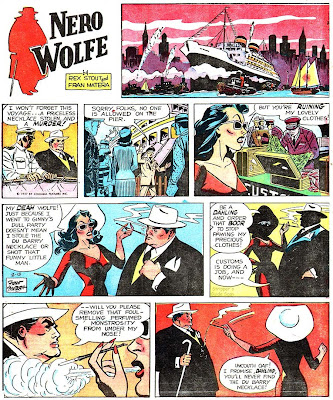 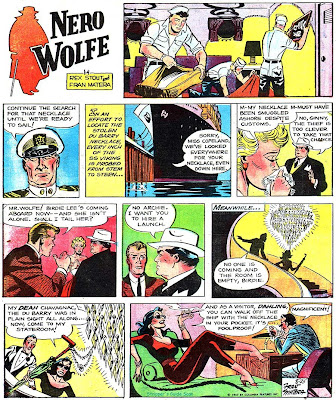 Columbia Features was a small outfit that is memorable mostly for their strips featuring licensed characters. Here's Nero Wolfe, a corpulent detective created by noted mystery writer Rex Stout in 1934. Wolfe, along with his legman Archie Goodwin, were featured in a long series of popular novels and short stories that kept Stout busy at the typewriter for the rest of his life.

The comic strip adaptation, despite being well-drawn, had no such popularity or longevity. The daily and Sunday strip debuted at the end of November 1956 and managed to stay afloat for less than a year and a half. For such a short-lived strip it had a tumultuous history.

I haven't come across a good enough run of Sundays to give a full accounting, but here's what I can offer:

Note that Ed Herron, who may have been handling the writing chores from the beginning of the strip, didn't get credit until Christiansen came on board. Mike Roy recalled, however, that John Broome did the uncredited writing, and was replaced by Ed Herron. He also said that Mike Peppe did inking on the series (during Roy's tenure only I presume).

Although the series sputtered out quickly, Columbia continued advertising its availability until 1972 in Editor & Publisher (Columbia did this with most of their features). I am not aware of any newspaper that picked up this strip for a late appearance.

Here's a site that discusses the comic strip and reproduces more examples.

Comments:
One thing that's rather odd about the story that you excerpt: Wolfe was notorious in the books for refusing to leave his brownstone, and very little could induce him to so leave. Usually, it was Archie that did the legwork. Yet here is Wolfe, in the fresh air, no less. Curious.

I have put up a couple of Sundays from mid 1957 that seem to have been pencilled or lay-out by Mike Sekowsky.

I read this story decades ago and remember it well (Birdie Lee's character is unforgetable) and the reason why Wolfe is at the ship has nothing to do with the crime, and he is held there until the stolen jewel is retrieved.