Obscurity of the Day: Punky 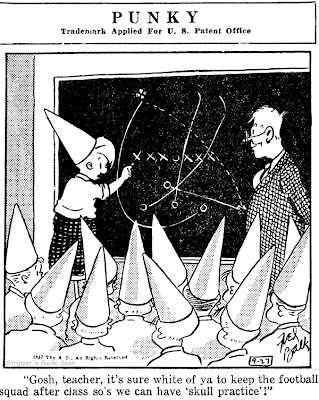 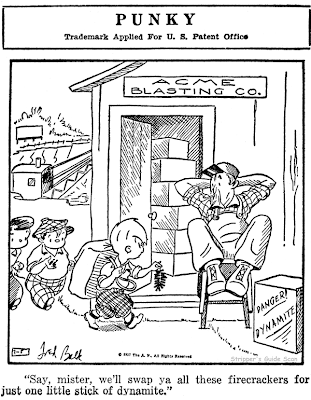 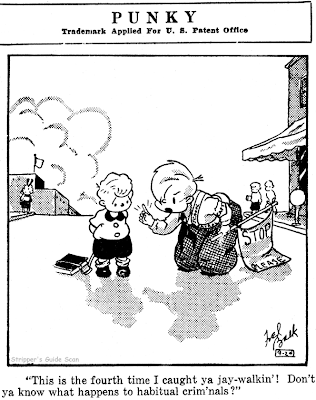 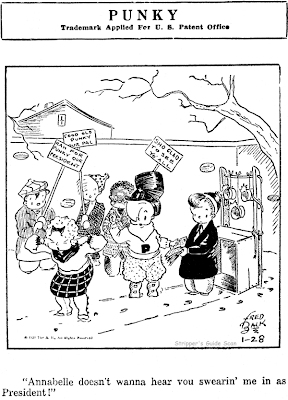 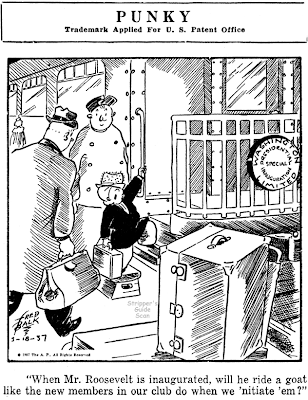 Magazine gag cartoonist Fred Balk made only one foray into newspaper cartooning if you don't count his occasional appearances in the generic gag panels such as This and That, Funny Angles and the like. You can hardly blame him for his reticence, though, considering that his one experience was a bad one -- working for the Associated Press' notoriously cheap feature division.

Balk's panel cartoon Punky ran for the span of a one year contract, from November 30 1936 to November 27 1937. Balk's kid was a little wiseacre, always looking for trouble and seldom having trouble finding it. He bore a passing resemblance to Percy Crosby's Skippy and had a similar little tough guy attitude.

Fred Balk, for all I know, was a phantom. I can find no biographical information on him at all despite the fact that he was a very prolific gag cartoonist for many years. I guess I shouldn't be too surprised, though, since many of these second-tier gagsters left little behind but their drawings. Note to writers; a reference work to magazine gag cartoonists would be a welcome addition to many libraries.

He was my great uncle and I have all of his straps.

He was from Chicago, served in the navy, and was married. I met him a few.times when I was very young. He gave me a scrapbook with what he said was the only collection of all of his strips. I've wondered what to do with it. Any ideas? Not in great condition. Redtailstinger@gmail.com

last name was Bialk. He changed it and moved to PA to escape legal trouble. His sister Elisa Bialk wrote children's books and I have a few of those as well

Scott, I would love to showcase some of those cartoon son my blog if Alan doesn't want them first. My blog is The Fabulous Fities at allthingsger.blogspot.com. I can combine it with the AAFF work I have. I also think he is among the artists in one of my many posts about daily gag panels such as This Funny World and Laff-A-Day.

For sure! I have a book with all of his AP strips. I wonder if they are still under copyright? I had some other comic books I inherited that I tossed, but now realize he probably did some artwork in those as well. I have a framed picture of one of his comics that appeared in the Post hanging on my wall. I read in another strip that he was inspired by his nephews, who were Bob and Dicky. My cousin Bob was a great guy who loved to perform as a clown or Santa. Dicky died young. Uncle Fred was a character. When he came to visit he insisted you pay attention to him, so he would set his chair right in front of the TV, lol! I was a big WWII buff and asked him a lot about his time on the USS Mississippi, and he shared some stories but ended up saying that he lost some close friends and didn't want to talk more about it.

At the top is a picture of him and his wife. https://redtailblogger.blogspot.com/2021/04/blog-post.html

I sent you a mail, Scott, but it seems to have bounced... try me at geapelde@upcmail.nl.