Obscurity of the Day: Nervy Nat 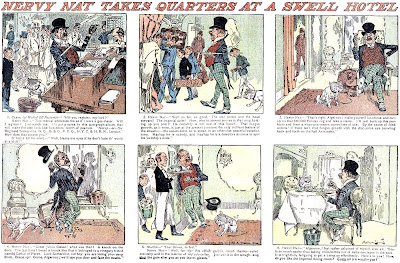 Nervy Nat is our second feature in the 1909 Judge syndicate offering (see yesterdays post for more on this rare short-lived syndicate). The series concerns a rascally ne'er-do-well who specializes in breaking into high society. The series was a favorite of Judge magazine readers. The great illustrator James Montgomery Flagg was responsible for most of the Nervy Nat material, but not all of it. In the newspaper series of 1909 Arthur Lewis drew the majority of the strips, including the sample above.

Unlike Little Johnny and the Taffy Possums, discussed yesterday, Nervy Nat made it all the way to the end of the Philadelphia Public Ledger's run of the Judge offerings. Here's a breakdown of the credits for the run:

Nervy Nat also starred in a second newspaper series later on, but that's a subject for another post.

Once again, thanks to Cole Johnson for the info and the scan.

Comments:
I just listed a 1909 Captain Fibb (Kahles) and a W. M. Goodes cartoon on ebay. (I was doing some research for the listing and found your blog.... Thanks!) See them under ebay Seller PrintSavior.

Is your eBay ID meant ironically? It appears that your items are mostly prints razored out of magazines, a practice we collectors really dislike.

Not at all. 'We collectors' is a generalization on your part. There are many collectors that are very appreciative of the items that I find (and save from the garbage heap -- no pristine books/magazines cut here) for them. I'm sure, of course, that you being a 'purist' have NO such items in your collection.
BTW, I just listed a LITTLE JOHNNY and TEDDY BEARS (with Santa), and a LITTLE JOHNNY and TAFFY 'POSSUMS (with Santa) and am working on a NERVY NAT. Thanks again for your informative site.