Obscurity of the Day: The Barnyard Club 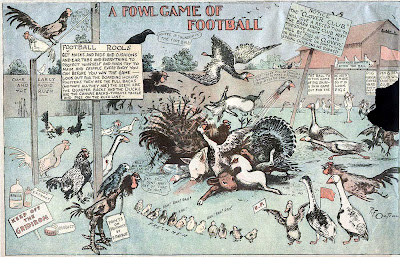 The Barnyard Club is one of those features that, if we were to be able to unlock its secrets, might be very revealing of the early comic strip business. It was summer 1898, and R.F. Outcault was in the process of moving back and forth between Pulitzer's New York World and Hearst's New York Journal. Somehow in the middle of all this Outcault created a pair of features that, as far as we know, ran only in the Philadelphia Inquirer. We've covered this subject before when we talked about The Country School, and at the time mentioned the existence of a second series by Outcault. Well, here it is, once more courtesy of Cole Johnson.

The Barnyard Club ran July 17 to November 6 1898. An odd side-note (or maybe its crucial -- who knows?) is that J.B. Lowitz produced a Sunday panel by the same name for the New York World earlier that year.

Pepe by Will, Holly Wood by Jack King, Milford, Pam by Gus Jekel, Life Wirh A Wife, Merton Musty by Dick Moores, Sleepy Holler by Jerry Hathcock, Animal Antics by Bob Dalton, Sidetrack by Dick Shaw... have you got anything on these weekly comics? And what's the animation connection?

Hi Ger -
That's quite a find you made! No, I certainly had never heard of any of these features, but I jumped onto newspaperarchive to see if I could find the strips you were talking about. Sure enough, a whole page of funnies running in the Redwood Journal-Press-Dispatch starting 4/10/50.

I could find no syndicate stamps, but I do have one clue as to the origin of this bunch of weirdies. Dick Moores, Gil Turner, Ray Patin, Jerry Hathcock and Dick Shaw were Disney employees at this time. Seems we have a whole page of funnies produced by moonlighting Mouse House folks!

Can anybody out there shed any light on this???

Which is exactly what I found (or ran across, actually). I have downloaded the whole run since, which doesn't quite make it to the end of the year. I sort of expected a Mouse group initiative, but don't know of it was confined to the one paper. There is a small change in the runup later.

And eh... wasn't Jack King an animator as well?

There is also a Tom Ray involved... and there is an animator called Tom Ray (old enough to have been in WWII) who has his own website. Could it be the same and could we ask him? I'll go after this, if you like.

Hi Ger -
As I've proved many times on this blog, I'm no expert on animation people. Other than Dick Moores, the only way I found out about the rest of these guys was doing Googling. By all means, please see if you can make contract with this Tom Ray fellow.

I checked Cartoonist Profiles #30 that has a bio of Moores. Turns out in 1950 Moores and Tom Boyd had a start-up business called Tele-Comics doing TV animation. It says they had 43 cartoonists working for them. Maybe they tried to syndicate this weekly comics offering as a sideline?

I also wanted to check my E&P files. Unfortunately I don't seem to have the bound volume for January-March 1950, but I do have April-June 1950 and I found no mention of the venture there.But the announcement would be more likely to be in the volume I'm missing.

I'm also going to try contacting Alberto Becattini, the ultimate Disney expert, to see if he can shed any light on this.

Newspaperarchive crapped out on me after November 8 1950 -- were you able to go farther with that paper?

Nothing after Nov 8 for me either. I did find mention of something called NBC Comics, which was a television program featuring 'animated comics'. The four titles mentioned were all not on this comics page (and in fact, I have found them nowhere). From the Ceda Raids Gazette, April 15 1951: This comes from Don Dewar, former lawyer and film studio executive, who now heads Tele-comics, Inc., one of the few firms making cartoons for television. Dewar and two partners - Jack Boyd, formerly with Walt Disney and Dick Moores, veteran newspaper cartoonist. (...) The 15-minute program was devoted to the adventures of three heroes: Danny March, private eye; Boxer Kid Champion and Rocketman Space Barton.

The comics page did continue after Nov 8.
Keep on looking. :)
Just grabbed a page from march 1951 with a slightly different line up. Bob Karp doing "The Middles" and "Merton" is now signed by "James".
Thanks for sharing your find with us Ger!

Hi Joakim --
When I say newspaperarchive crapped out on me, I mean literally. The dates were listed, but when I tried to show them the site freaked out. If you're having better luck, any chance of telling me dates and page numbers so I don't keep hitting those errors?

The page began on April 19, 1950 (There's a notice about it on the first page that day.) and the last I've seen is from May 1951. But there might be more.
They all appeared in the Wednesday edition.
The Newspaperarchive didn't work properly for me either so I searched for "Sleepy Holler", "Gil Turner" etc instead and got direct links to the right pages. :)

When The American Way by Tom Ray is ot on the comics page, it is on another page (maybe because of it's political anti-red content). It continues after most strips have stopped. So there probably was a gradual fade-out of strips, while other weekly strips were added. In july 1951 I have Indian Summer by John Zima, which according to your I-list was from an outfit called Atlas. In August it was drawn by Jay Ganschow, who also delivered Heavy Hannah (also from Atlas, as per your H-list attributed to a John Haslemo). He also did Famous first, which is not on your missing list, so it's still open if Ganschow was part of the crew or someone attached to the paper. But why would he take over two Atlas strips?

Alberto Becattini sent me quite a bit of information regarding this mystery. Following is from several emails:

"Yes, as far as I know most of these people were working at Disney during the early 1950s. And I do think that they were also part of Moores and Boyd's moonlighting Tele-Comics (aka NBC Comics) crew.

Notice that some of them were writers, but they could obviously do storyboards.

Specifically:
Will - Should be James Will - animator. I have him at Disney in the 1940s, but perhaps he was there even later

Jack King - Longtime Disney animator/director, was there from 1936-48

Bob Dalton - Might be Cal Dalton, animation writer at Disney in the
early 1950s

Thomas (Tom) Ray - I have him at Warner Bros. in 1957-63 and later at Chuck Jones/MGM, but I guess he was at Disney prior to that. And yes, he is still active and has his own website.

You can view more complete profiles and credits for these artists at my website:
http://www.immaginariofiorentino.com/albertopage/

I then asked Alberto if he recalled reading any quotes from these guys regarding the newspaper venture:

"No, Allan, I don't remember anybody mentioning these strips. The only information I have concerns the strip The Middles, which was written by Bob Karp (longtime Donald Duck newspaper strip writer), and drawn by
his brother Lynn Karp (Disney animator and then comic-book artist at Western and Fawcett). This strip is said to have appeared in Australian
papers as late as 1955, having started in 1944 according to some
sources and in 1950 according to others.

This is all very interesting, and I look forward to knowing more. I'll be looking at the blog in case somebody comes up with more insights.

Anyway, the best way to know something is to get in touch with Tom Ray who is, as far as I know, the only surviving artists among all these."

I responded, regarding The Middles:

"It was distributed by Consolidated News Features. According to Paul Leiffer, start date is 4/13/44 (I have samples from '44, so the 1950 start date is definitely bogus). I have a note that the strip may initially have been a daily, but I haven't checked through my files to figure out why I said that. The feature was also distributed as part of the Western Newspaper Union package. The strip was advertised in E&P through 1955."

Looking more carefully at the Milford Muddle strip in the PDF page you sent, I can see that it was drawn by Jack Bradbury (Disney animator 1936-41, then Warner Bros. animator 1942-44). I have no doubt about this. Lettering on the strip is by Melvin "Tubby" Millar, a Warner Bros. story man.

What I gather from this is that these strips were not coming from the Tele-Comics staff, but more probably from the Sangor Studios staff. This was an outfit led in California by animator Jim Davis, producing funny-animal comic-book stories for such publishers as ACG/Creston, Better/Standard and DC/National from 1944-52. Davis employed about 70 moonlighting story-men and animators. Evidently at a certain point Davis & Co. decided that they would also try their hands at newspaper
strips. Of course this is just an educated guess, but 90% of the people involved here were also part of the Sangor Studios freelance crew."