Obscurity of the Day: Little Orvy 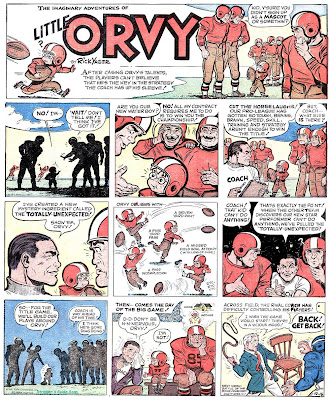 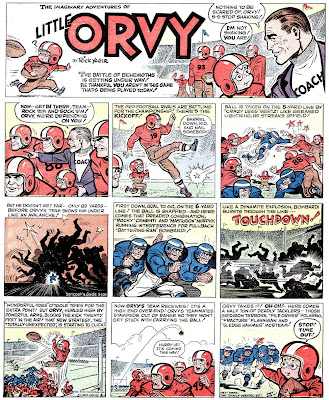 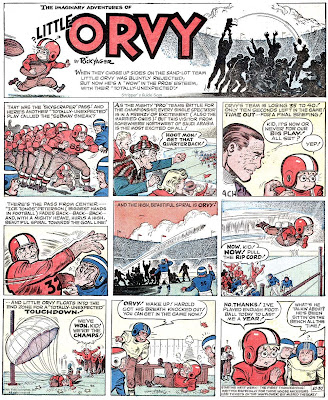 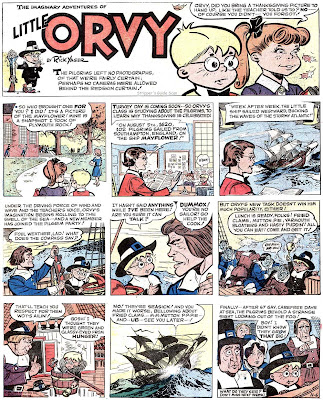 After over a quarter century of service on the Buck Rogers strip, the stormy relationship between artist Rick Yager and syndicate chief Robert Dille exploded in 1958. When the smoke cleared Yager was off the strip and Dille was happy to see him go. Yager vowed to create a rival sci-fi strip that would zap Buck Rogers off the comics page.

But Yager's dreams of revenge went unfulfilled. His next comic strip, syndicated by the Chicago Sun-Times Field Enterprises syndicate, was about a bespectacled little boy named Orvy and his daydreams. While Orvy did indeed occasionally fantasize about the future, most of his daydreams were of a more prosaic variety. The strip was firmly in the comedy vein and actually succeeded at that rather well. Considering that Yager's previous comic strip experience was with the always earnest and serious Buck Rogers, whose only comedy was unintentional, Little Orvy was quite surprisingly good. Little Orvy was a Sunday only strip, and each of his fantasies usually played out over the space of 2-4 pages. To my eyes, Orvy's humor owed something to the hip, inventive stuff that was on display in the pages of Mad magazine.

What might have held the strip back from success was the fussiness of Yager's art. The breezy writing was confounded by an art style that looked like it would better match a serious strip. Since Orvy often fantasized about historical subjects, I can imagine that kids might have thought the strip was supposed to be educational and avoided it like the plague, not realizing that under that facade lurked a pretty funny strip.

Comments:
I corresponded with Rick Yager near the end of his life, as he was losing his eyesight (and his job on the "Grin & Bear It" panel) In his scrawling hand he received my admiration for his Buck Rogers work very kindly and graciously. Thank you for digging this up.

I actually think Yager's style, especially his super-thick outlines and postery compositions, work well for a humor strip. It certainly isn't the first to combine realistic backgrounds with cartoony characters.

Was the strip's coloring really just red and blue? Also, I don't get why the kid's glasses glow in every panel.

Hi Smurf --
Y'know I didn't even notice those glowing glasses until you pointed it out. Weird!

The predominant reds and blues are an artifact of trying to restore the strips. They're bolder that greens and yellows, so they tend to really pop when you start monkeying with levels. The restorer pleads guilty.

Thanks for this information about Little Orvy. The strip was syndicated in the British comic Knockout in the 60s, and some episodes were reprinted (not in colour) in another British comic, Buster, in the late 70s. As I recall, the artwork looked a little dated, but the sophistication of the humour still held up well.

Orvy also ran in the British weekly "Valiant" in the late 60s.

In the one example of the strip I have, there is no "glow" to his spectacles.

I see a lot of Al Capp influence in Yager's work on Orvy.

Rick Yager was my grandfather, and I can fill in some of the blanks about this strip and its beginnings. I think that you are correct in noting that many of the strip's antecedents are in Buck Rogers. If you look at Rick's work on Buck Rogers, you see the evolution of his style, and how it actually became cleaner and less detailed by the late 1950s. The falling out with the syndicate over Buck Rogers was quite sudden, and there were actually some uncompleted Buck Rogers strips that were never finished or published (both dailies and Sundays). I would say that those strips pointed in the direction that Little Orvy later went-- less hyper-realistic and much more stylized. Rick was a master at using different styles, and when he later took over Grin and Bear it, few people realized that strips in George Lichty's style were appearing long after Lichty had passed away-- Rick had amassed a library of all Lichty's strips and learned how to match him, even though the style was very different from his other work.

As to the colors on the strip, they were eye-popping, as they were on Buck Rogers. Rick was primarily a water color artist, and the originals were stunning. The limited range of colors available in a newspaper did not do them justice, and unfortunately, the colors themselves faded over time. But when he painted them, they would make your eyes pop.

As to the humor, Rick was also much more of a humorist than you might suspect from Buck Rogers, where the syndicate kept him on a very very short leash (the ever-shortening leash was the ultimate source of friction between them). Unleashed, his work made Mad Magazine or Al Capp look tame. It's my hope that someday some of this surviving and very much unpublished work can be compiled and published, so that fans of strips like Buck Rogers and Little Orvy can have the same insights into Rick that I was fortunate enough to have. He was one of a kind.

I had no idea this comic strip existed, until I discovered that it briefly run in the weekly UK boys comic KNOCKOUT. I have an image of an ad announcing the coming of the feature, but I don't have the option of posting it here.